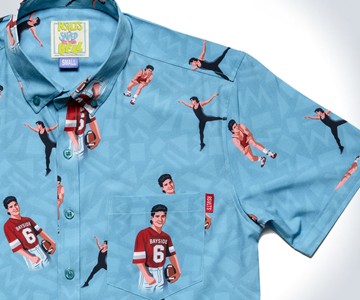 Did you know Saved By the Bell shares a 30th anniversary with Seinfeld? And a 25th anniversary with Friends? Zack Morris, AC Slater, Kelly Kapowski, Jessie Spano, Lisa Turtle, Screech Powers, and Mr. Belding made their television debut on August 20, 1989. Thirty years later, the crafty kids and lumbering principal of Bayside High are still a referential and oft-quoted favorite.

But instead of the proper tribute it deserves, a LEGO set like the ones made for Seinfeld and Friends, all Saved By the Bell got for its 30 years of pop culture longevity is a crappy T-Shirt.

No, wait, a crappy T-Shirt and 4 crappy short sleeve button-ups.

This dude will puff up his chest and dry and iron your shirts all day long, every day you've got laundry, for a single payment of, like, a hundred bucks. What a dummy...