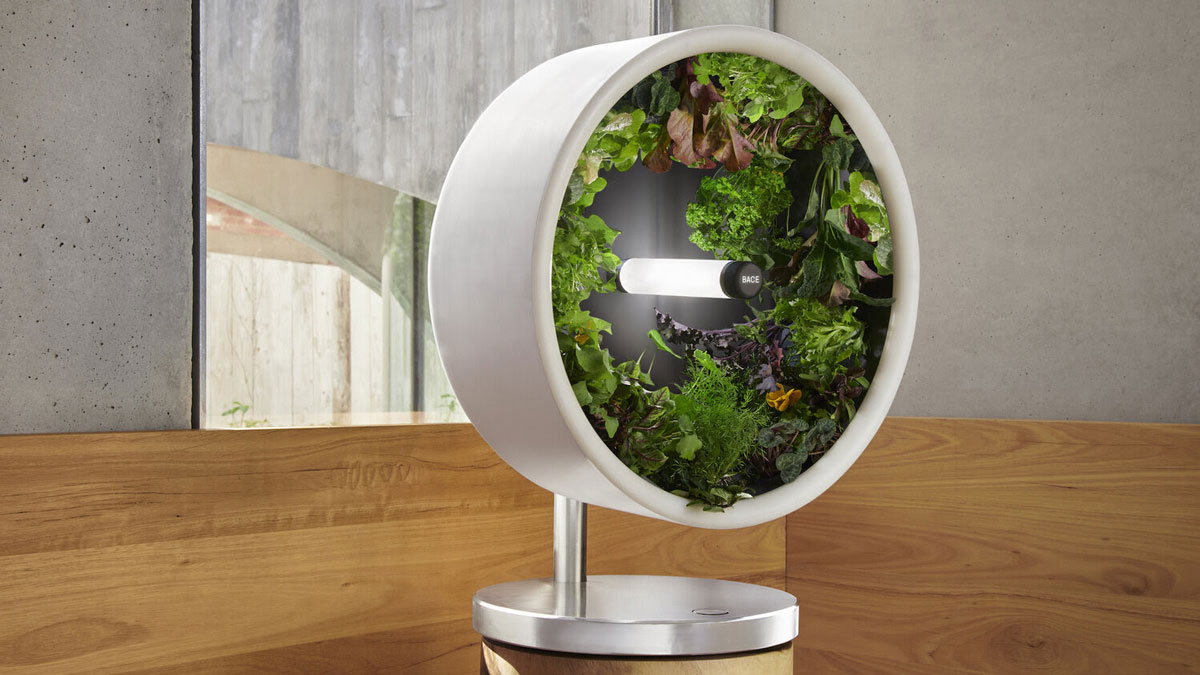 You'll need to harvest - and eat - a lot of herbs and lettuce before the Rotofarm pays for itself, but this soil-free vegetable garden for your kitchen has more to offer than just its bounty. Designed as a circular farmbed with a black backing and brilliant grow light center, the Rotofarm is as much a piece of art as it is food producer. And combined with the cultivator's small, 11.8" footprint and rapid-growth technology, even at a crowdfunding rate of plus or minus $700, this might be the garden all you Mary, Mary Quite Contrarys out there have been waiting for.

The Rotofarm has a 5' growing area around its wheel of life. Plants are nourished hydroponically, via a water and nutrient reservoir in the base that feeds into the farmbed, which moves just like the ferris wheel it resembles, 360 degrees every hour. This both gives seeds / plants equal access to the food, plus expedites their growth process by allowing them to spend half the time upside down. Apparently (well, according to Rotofarm maker Bace) negativity gravity has a flourishing effect on produce, and its usage here was inspired by space shuttle technology.

Growing your delicate vegetables indoors is also generally beneficial in the sense that you can protect them from wind damage, fungus, insects, sunburn, and water loss. Once your harvest is in, it's also a lot more accessible.

Herbs and lettuces recommended for Rotofarm growth include parsley, cilantro, mint, wheatgrass, chives, arugula, kale, spinach, and leaf lettuce. You can learn more about the Rotofarm, and pledge for one of your own here in IndieGoGo through October 4, 2019.

A gold tooth plus a captain's hat equals a whole lotta monkey business in Garden Glory's Monkey Planters. Available in black and white, Monkey Planters are sculptural pieces of terracotta made for your beloved dracaena...

I've heard of concrete jungles, but these modern planters are the first concrete islands I've seen. And unlike the cold, soulless jungles, Bella Vista Canyon's Concrete Islands are brimming with life - succulent life!...

Sink your teeth into this Giant Corn Planter, some sweet corn if I've ever seen an ear of it, and the latest piece of oversized food art from Third Drawer Down. The corny houseplant home is made from moulded resin, and...

I always knew pouring my leftover wine in plants would make them thrive. This self-watering Bottle Planter from Kikkerland just confirms that ferns and philodendrons love a good Cab Franc as much as I do...

While a Pac-Man Ghost will definitely eat you up the first chance it gets, the little villain appears to be very protective, and equipped to take exceptional care of your houseplants...

Damn you, Double Succulent Planter Swing! I woke up this morning to my cat playing bongos on my forehead, followed by my mama calling me at 6:45 a.m. saying I need to come fix her internet because it's "broken." And I...

It's appropriate that the I.V. Plant Pot, a planter configured to be self-watering via a bag and flow regulator that look like a medical I.V., comes from a design firm called Vitamin Living. Gotta keep those plants hydrated...

OGarden thinks your plants might like to take a ride on the ferris wheel too. This rotating indoor garden gives those of us without the space or climate conditions we'd need to grow our own food in a VegTrug outdoors...