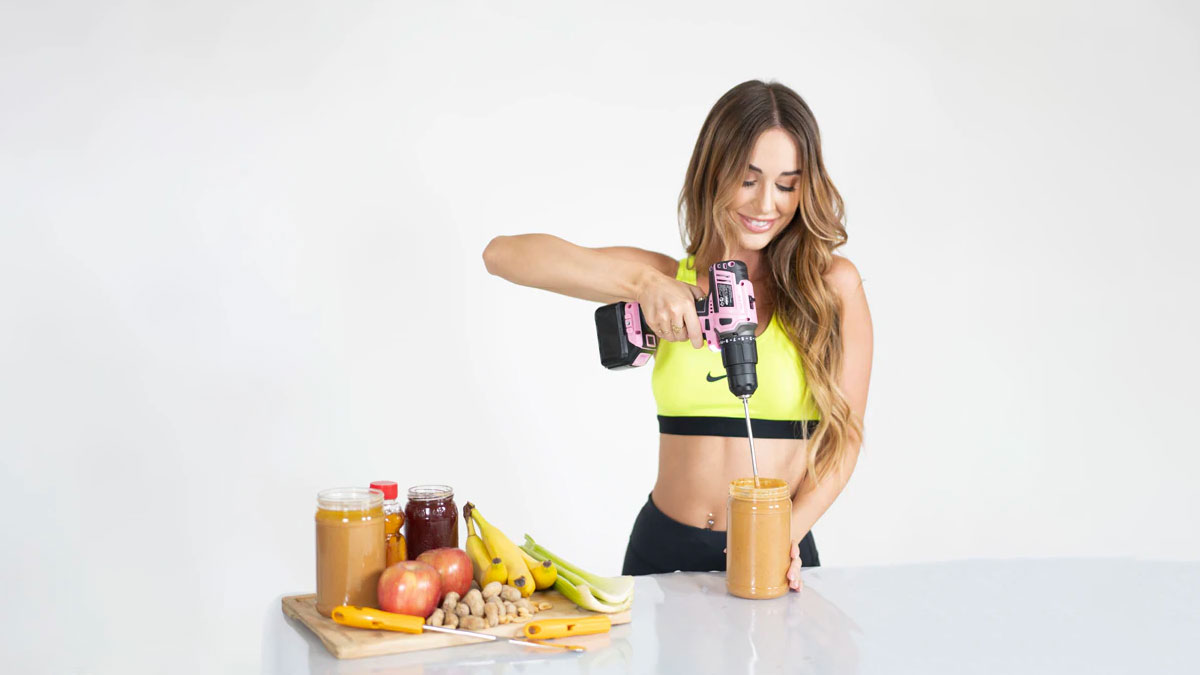 I think this natural peanut butter mixer that attaches to your power drill is called NutBustir because NutBuster was already taken by a locking tune stabilizing system for guitars. And also, every Karen out there.

What's in a name though? That which we'd call a NustBuster, but due to trademark regulations have to call a NutBustir instead, will still attach to your drill, stir your separated nut butters with 12 to 18 volts of force, and eliminate the mess and sore forearms you'd experience doing it manually.

In addition to electric power drills, the NutBustir...oh wait. I just realized they called it NutBustir on purpose, not as a consolation prize. It's NutBustir, an attachment that busts the hassle of reincorporating nut solids with their oils by stirring them for you. OK, good on you, clever NutBustir namers. Anyway, in addition to electric power drills, you can also attach the NutBustir to your hand mixer, though that obviously won't make you look as bitchin' while you use it.

The NutBustir is made of stainless steel, with a shaft culminating in a butter-knife-style blade, but with a curved tip the company says will ensure you get "every last drop" of peanut, almond, cashew, sunflower, or whatever butter you're diving for, out of the jar. After stirring your separated nut butter smooth, you can detach the NutBustir and use it as a spreader / the final step towards enjoying the fruits nuts of your labor.

The Reese's Peanut Butter Ugly Sweater candy is a 2021 holiday exclusive from Hershey's. And while I am in the minority of people who do not like the saccharine chocolate and dry, chalky peanut butter comprising Reese's...

To illustrate what awaits future owners of a Nut Butter Maker (i.e., my mama), I have included photos of some of the pulverized-peanut-themed treats I would like to have made for me. From left to right, they include:...

PB&J has grown up. Now it's the perfect companion for the dude who just wants to relax with a sophisticated adult beverage...but doesn't want to stray too far from his favorite squishy, sticky, nummy childhood sammich...

Naomi is like one of those girls who is incredibly hot and arousing, but also kind of stony and completely unapproachable. Dare speak to her, or even look at her for one beat too long, and she'll crush your nuts like...

This nifty Peanut Butter & Jelly Wallet with photo-real fabric looks so authentic petty thieves and street urchins will never suspect it's housing your cash and credit cards. On the flip side, beware of fat kids. Each...

Get yourself a JAWZ Blender and chances are you're gonna need a bigger...appetite. Glass for your smoothie. Tupperware container for all that nut butter this 3.5HP whirring blade of pulverization is gonna spin you up...

Mmm, chickpea butter. Sounds like...peanut butter hummus. Which sounds like...I don't know if "gross" is the right word since we do apply peanut butter to many savory applications, Thai peanut sauce being the first and...