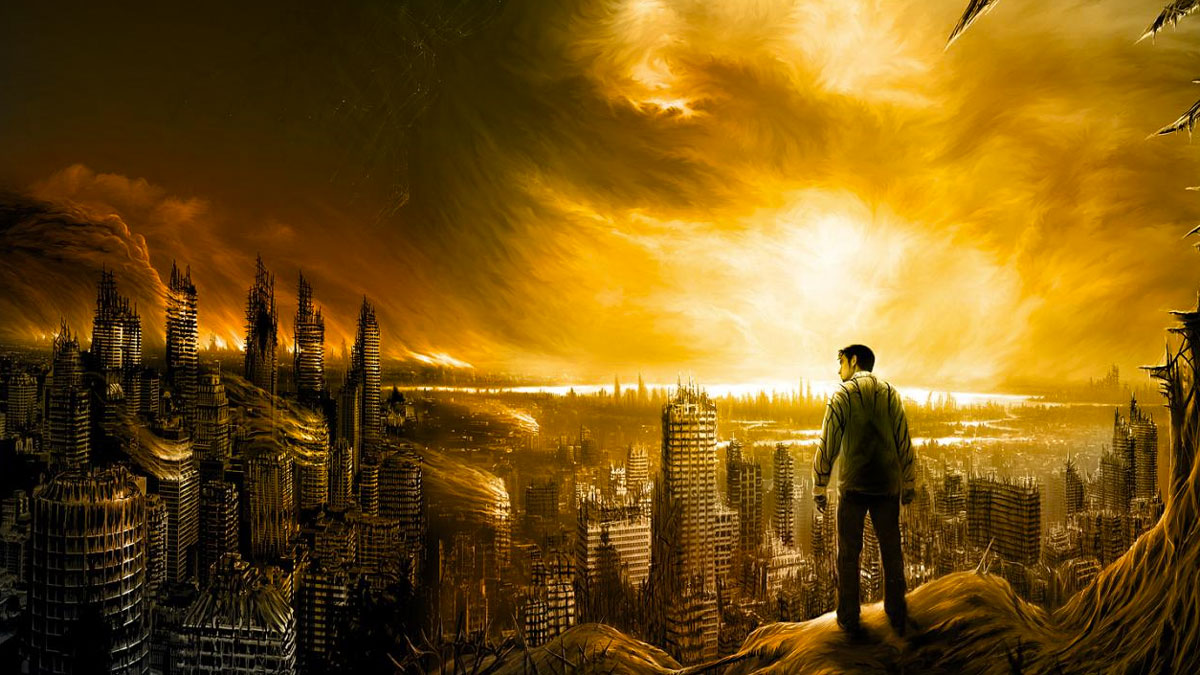 The Apocalypse. The End of the World. ZDay. It's all we talk about anymore. I'm willing to bet the only people on earth who aren't aware that the fit is hitting the shan on December 21, 2012 are those who are already dead. And boy will they be excited when they awake and rise up to join in on the wreaking of havoc. Speaking of which, are you ready to fight in the ultimate war? Defend your life, your family, your homeland, your planet? You might not win, but in this case, it's not about winning.

Here are a few things you'll need in your blitz to stay alive.

10. Skills & Balls. If you haven't been attending weekly Fight Club sessions since the movie came out in 1999, you're probably going to want to procure some hands-on training to learn to combat the supernatural creatures and Hades-sent chaos that will burst through the seams of our delicate, volatile world come the end of days. Both tactical and psychological preparatory work will be necessary to avoid freak outs in the face of putrefying flesh and mouths salivating for brains. We recommend Wish.co.uk's Mall Massacre Zombie Hunting Expedition ($189) or Riot Training Experience ($125).

9. Knowledge & Strategy. Know thy enemy. Hold friends close, hold enemies closer. An intimate understanding of the forces we're up against is crucial to our success on the eve of 2012. The Zombie Combat Manual ($10.20 from Amazon) and The Zombie Survival Guide ($8.99 from Amazon) deal specifically with the undead brain dead, while How to Survive the End of the World as We Know It ($12.24 from Amazon) and Be Ready When the Sh*t Goes Down ($10.19 from Amazon) take a more holistic approach to all impending doom. An honorable mention shout out goes to the Apocalypse Guide for Christians ($20.25 from Amazon).

8. Enemy Detection Equipment. On the hunt, in the dark, fast asleep--don't let unsavory elements catch you off guard or breach your designated safety zone. If you can't build an impenetrable fortress, try an alert device, such as this Cyalume Surface Trip Flare ($17.99 from Amazon; thanks, Manny), an ultra high intensity, 6" chemlight that activates via trip wire. Perfect for nighttime operations, and non-pyrotechnic so no one starts a forest fire in the process of saving their asses. For audible warnings, check out the easily toted and assembled Portable Intruder Alarm ($14.95 from Seidenburg Luggage).

7. Air. Preferably the breathable kind. The Israeli Civilian Gas Mask ($24.90 from Amazon) covers the full face in heavy-duty rubber construction and comes fitted with an NBC NATO filter. And if taking off into the mountains is part of your master survival plan, better grab a High Altitude Training Mask ($89.98 from Amazon) to acclimate your lungs and get your body into peak form during our last days leading up to our last day.

6. MacGyver Shit. Survival Kits must be turning an Apple product-esque profit this year. Most of them are equal parts portable and F'ing ingenious in their invaluable, compact simplicity. Our favorite is probably the SOL Survival Kit ($34.99 from Amazon), a palm-sized, indestructible, waterproof case stashed with the likes of sewing and fishing provisions, a fire starting tinder, and a 150-pound-test braided nylon cord. Built into the outside of the case are various other MacGyver-approved tools, such as a knife, compass, and rescue whistle. First runner up awards go to the Zombie Apocalypse survival kit in a sardine can ($15.99 from Amazon).

5. A Combative Pimp Suit. Maybe a Tactical Vest ($54.79 from Amazon) with multitudinous pockets for rifle mags and a fully integrated loop system for attaching weapons and tools. And definitely some body armor. Because let's face it, when we go to battle, we're probably gonna take a hit. Or 900. We should consider protecting our vital organs. So who wants to buy me a Bulletproof Polo ($3,965 from Fresh Polos)? OK then a Military Combat Shirt ($39.99 from Amazon) with a 230-degree melting point?

4. Edibles. We need food. And once all the Mickey D's and KFC's are blown into interstellar oblivion, we're going to have to find something other than a Big Mac and 6-piece chicken dinner to provide our 8,000 calories of daily nourishment. How about a bucket filled with 200 servings of freeze dried dinner as a sub for our typical bucket of fried poultry? The Emergency Survival Food Supply ($80.99 from Amazon) even has a 20-year shelf life on the off chance that the Mayans did their math wrong and we really have 'til 2022. Supplement the bucket o' flavor with Datrex's 3,600-calorie energy bars ($18.10 from Amazon). As in 3,600 calories in each bar. Mmmm, bet those are magically delicious blends of butter and...butter.

3. Potables. An easy one. The waterBOB Emergency Drinking Water Storage Bladder ($23 from Amazon) for 100 gallons of safe H20 snugly stored in your bathtub, and the portable LifeStraw Personal Water Filter ($24.95 from Amazon) for rendering contaminated streams and public fountains potable and thirst-quenching post hand-to-hand combat with the zombified A-Team.

2. Weapons. For better or worse, there is no shortage of these. Walking Dead fans will scramble to get their fightin' fingers on Gerber's Zombie Apocalypse Survival Kit ($288 from Amazon), stashed with machetes, an axe, and a few tactical blades of varying lengths. I'd be more likely to spring for a few ZDay Blades & Bludgeons, because they're handmade and look way cooler. Which is important because if you survive, you want to look cool during your Oprah interview, and if you die, you want to look cool in the live camera pans and Carol Guzy photographs of the death and destruction.

1. A Fortress. Behold the Survival Condo. 54,000 square feet of space protected by Atlas "F" Missile silos built by the Army Corps of Engineers to survive a direct nuclear strike. The dome structure that will cover the completed project's silo cap will also be able to withstand winds in excess of 500 mph. Interior provisions--such as organic hydroponic and aquaculture food production systems, a redundant water supply with 75,000 gallon minimum reserve tanks, and redundant air filtration systems suited to stave off nefarious nuclear, biological, and chemical particles--can sustain 70 people for more than 5 years. On top of that, it's cushy. Condos are fitted with 50-inch LED TVs and biometric keyless access, and the building is replete with a general store, movie theater, indoor pool and spa, and library. So that once you're in, even if it were safe or possible to leave, you probably wouldn't want to. Since the banks have refused to finance those moving to purchase a Survival Condo unit, if you want one you'll have to round up $1.5 to $3 million in cash. (And thanks, Manny).