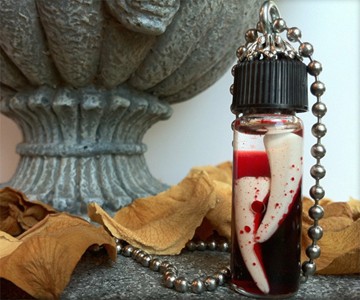 Abe Lincoln isn't the only one who can spout off at the mouth about his entirely fabricated vampire hunting adventures. I can make shit up just as well as a dead president. For example, I scored this set of vamper fangs a couple months ago in a hookah lounge in Istanbul after some undead bloodsucker had a few too many puffs and started leering at my carotid artery like my buddy Gary's pit bull leers at my deep fried turkey legs on the 4th of July. Alone in a foreign city, no friends amongst me, and the sole target of a toked out vampire's growing lust, the precariousness of my situation set in. I knew I should be planning my escape, but all I could think about was my regrettable decision to douse myself in Sex Panther Cologne before leaving my hotel room that evening. Forcing a few deep breaths and eyeing the pipe at the end of the hookah hose, I realized I had one line of defense, one plan, and one chance to execute it.

As the vampire's fangs cradled the pipe for his next puff, I slid my fingers into my right pants pocket, and craned my neck towards him. Enough, I hoped, that the veins throbbing from my neck would heighten the scent of blood mixed with Sex Panther long enough to distract him as I loaded my knuckles with the Blaster I now wished I'd never prayed for the opportunity to use. Finishing his hit, the fanger turned to me with the pipe, and flashed a smile that will haunt me to my death. A smile, though, that hit my heart like a Pulp Fiction-sized needle of pure adrenaline. The moment my left hand formed a fist around the hookah's silver nozzle, my right arced like a launched projectile from my pocket to his jaw, unleashing 950,000 volts of blue lightning upon impact. The stun froze him for...it couldn't have been more than seconds, but at that point I was moving so fast I may as well have been a computer animated special effect. I stood over him, squeezed the pipe tight, and, with the strength of a thousand men, drove the tip straight into his heart...and then kind of had to hammer it with with butt of my palm a few times because those things are only a few inches long, and just barely penetrate the outer chambers of the heart at full insertion.

It was enough, though. The vampire gasped, began to dry and shrivel. His lips hung open in full paralysis, so I reached in and, in my final act of slayer badassery, yanked his fangs from his mouth as a trophy and the only souvenir from Istanbul whose price I didn't have to haggle over for 30 minutes. Now I wear them around my neck in a glass vial filled with a special blend of blood-like liquid and light oil for all to admire.

Post Mortem FX's vampire fangs are hand sculpted, molded, and then cast in resin. Each former bloodsucker has also been sanded and coated clear for durability. The glass vial they float in measures about 1 3/4" and hangs from a 24" stainless steel, size #6 ball chain.

Target practice with human targets seems so cruel (although practical since most of the time it's other people that are getting shot). Why not practice drilling holes in things that are already dead and will probably...

One way to make others jump out of their skin is to jump out of yours. This Unzipped Flesh look requires some legwork and talent to pull off, but look at the striking levels of gruesomeness and morbidity one can achieve...

Now kitchen countertops can look like a bloody mess whether you've cut yourself or used them to butcher a half side of beef or not. Great for Halloween, great for an otherwise ho-hum Monday night, great for getting a...

Now here's a bloody handy gift for Halloween. Bryan Lawrence makes these terrifically creepy candles, you guessed it, by hand, using flesh-colored wax for the outer layers of their fingers and palms, and blood-red on...

I'll see your kiss it and make it better and raise you a gasp, gag, and vomit up my corn dog and curly fries. Designer, inventor, and gore master Sherwood Forlee makes Boo-Boos, adhesive bandages that will help make your...

I need one of these for sure. Not just for display either... For killin'! Some creepy dude named The Somber Raven made these Vampire Killing Kits and they're pretty legit. You can tell they're what's bolstering him from...