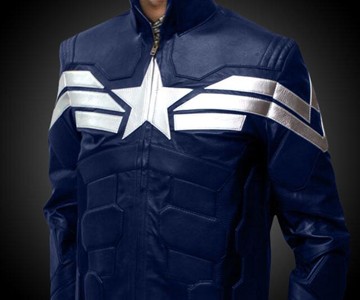 While the Captain America Winter Soldier leather jacket doesn't exactly have the same presence as the Captain America motorcycle suit, in a way it's a much more practical investment because A) it's way cheaper, and B) you have a way better chance of wearing it in real life without getting beat up. (For San Diego Comic-Con though, full-body USA hog suit all way!)

Film Jackets will outfit you to become a Super Soldier on your morning commute and night of bar hopping alike. Their 2014 Captain America jacket release was designed to replicate the superhero's own 2014 release, The Winter Soldier. Available in synthetic and real leather outer shells, the all-weather, all-occasion, all-powerful jacket even assists those who don't already have the body of Chris Evans with cut padding on the abs and delts. I've found this type of amenity also comes in handy when I call a girl fat because she won't talk to me and end up on the receiving end of a sucker punch.

He is the first Avenger. An unparalleled patriot whose loyalty, stealth, and shredded abs have kept America safe from the likes of Doctor Faustus, Viper, and HYDRA since 1941. And now, motorcycle-riding superhero devotees...

So this Dark Knight isn't quite like the Dark Knight you and I are used to. Well, I mean I guess he would be if our Dark Knight lived in a 16th century video game and were as into the color red and the world of S&M as...

If you prefer to be the villain, hold a special place in your heart for Bane and his anesthetic tarantula-mouth mask, or just don't feel ballsy enough to wear the molded leather chest plate, gauntlets, and butt huggers...

Why simply dress up as Wonder Woman when you can transform into Wonder Woman corseted and zipped into custom sewn leather form-molded over motorcycle grade body armor? This UD Replicas creation isn't just a costume, it's...

School's out for summer. But school is not out forever. Sorry. Alice Cooper lied. I also hear the Age of Ultron is coming. Followed by a Civil War. Better gather your EDC pens, notebooks, and laptops and shield up!...

Supersize your efforts to write it down or sketch it out with these handmade jumbo leather journals from Lake City Leathercraft. The tomes measure 13" long x 10" wide, and come in a variety of embossed and bejeweled styles...