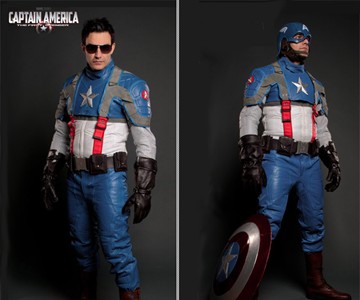 He is the first Avenger. An unparalleled patriot whose loyalty, stealth, and shredded abs have kept America safe from the likes of Doctor Faustus, Viper, and HYDRA since 1941. And now, motorcycle-riding superhero devotees, he's singled out you. Captain America, in a sweeping gesture of generosity, faith, and implicit understanding of the male drive to straddle a saddle and challenge their own mortality, is sharing a form-molded leather reincarnation of his iconic, evil-abolishing suit with the biking faction of his dedicated followers.

Not a feature from the uniform in the film Captain America: The First Avenger has been neglected. UD Replicas duplicates the classic color scheme, the aluminum accent emblems, and of course the venerable silver star, Steve Rogers' undisputed stamp of badassery, emblazoned across the suit's superheroic chest. Meticulously crafted gloves, boots, a functional belt, and detailed rigging cap off the aesthetics, while removable CE approved body armor in the forearms, shoulders, and spine render the wearer safe to hit the open road, and souped up enough to face off with the Nazis, commies, and fascists disguised as Prius drivers doing 50 in the fast lane.

Note: UD Replicas stated they were wrapping up pre-sales of the Captain America suit on April 27, 2012, but as of May 5, they still appeared to be accepting orders. This edition comprises a batch of 450, with delivery expected in July, August, and September. If you had the dollars and cajones to score one, we congratulate you...with acute envy that seethes and burns all over.