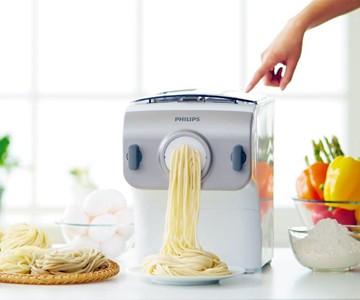 I was watching that Aziz Ansari Master of None show, and after Aziz's girlfriend told him she might move to Chicago for a job he decided to cope by learning to make pasta. By the end of the episode he had declared himself a phenomenal pasta maker, and she decided not to move after all. They celebrated with bucatini. I sat there feeling melancholy because I didn't have any noodles to eat on my side of the TV.

I considered purchasing my own pasta maker like Aziz's, but his was some KitchenAid BS that requires you not only to spend two-hundred-some-odd dollars on the parts that spit out pasta, but also another $300 on the stand mixer that churns them. And you have to, like, mix the dough and feed it through the holes yourself.

For way less money and, more importantly, substantially less effort, the Philips Pasta Maker will do all of that stuff automatically. Kind of like a bread machine (or an Indian roti machine!) but for pasta.

Dump your flour and water and whatever else goes into toothsome tubes of penne into the Philips Pasta Maker and it will take care of the mixing, kneading, and extruding portions of the noodles' creation. Basically, it will do all of the work, producing a pound of fresh pasta ready for the rolling boil on the stovetop in about 15 minutes.

The machine comes with a set of pasta discs for shaping spaghetti, penne, fettuccini, and lasagna noodles.

Global Grub is here to help adventurous cooks and the people who love to eat their masterpieces "explore new tastes and techniques in [the] kitchen." A great gift for foodies this holiday season, Global Grub DIY Food...

As if kitchen knives weren't intimidating enough on their own*, Dalstrong created their Shadow Black Series of kitchen knives. So now I can pair what they call a "menacing design" with the high probability that I will...

I don't know about the "fan" part, but "hungry" is a top word I'd use to describe myself, and as a hungry dude, if not a hungry fan, I do like the idea of eating delicious food that will make me slightly less hungry at...

The Maiullari Cooking Box: A Kitchen Solution for...Nomads? The Giovanni Pesce design is clever, I guess, but it seems like even the smallest and most efficient of apartments and homes are equipped with a kitchen. And...