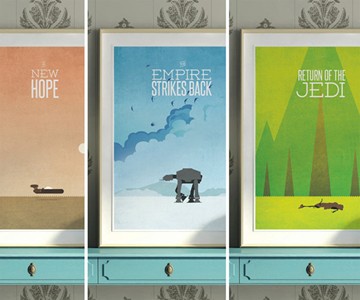 Artist Ryan McArthur might just be Epson printing a name for himself as an icon of icons. His Walking Dead Minimalist Prints gave understated life to the essences of Sheriff Rick Grimes & Co., and now his Star Wars Prints pay similar homage to some of cinematic history's greatest reels of film. The 12" x 16" wall huggers depict characteristic imagery from the original Galactic Republic trilogy, and are sold either individually ($15+) or as they belong: a triumvirate of geeky grandeur in complementary scenes and colors.

Interpretations of Star Wars installments A New Hope, The Empire Strikes Back, and Return of the Jedi awash high-quality Epson paper with a semi-matte finish and heavy basis weight of 255 gsm. We think McArthur's suggestion of hanging the set of peace-inducing orange, blue, and green hues in a baby nursery or pint-sized sci-fi fan's room seems most appropriate, though the childless and selfish can, of course, mount them in their own living rooms and sleeping lairs.