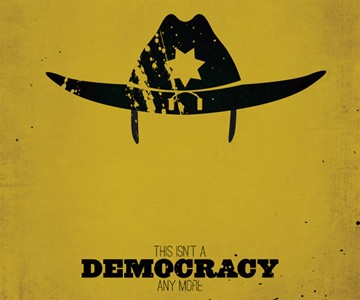 Minimalist prints work only for the rare group of people so ingrained in our culture and minds that a mere flip of hair, trademark accessory, or unmistakable body part identifies them to us. Think Elvis. Dorothy. Kim Kardashian. Though it's been airing for a only few years, the 21st century's obsession with zombies, and the poignancy of the show's characters, has skyrocketed sci-fi darling The Walking Dead into Kim K ass territory. So naturally, Toronto artist Ryan McArthur has taken the show to minimalist print levels with his five-part series of Walking Dead personalities gracing the buyer's choice of 12" x 16" Epson paper ($15.48) or stretched canvas ($51.64).

From the law-laying hat of Sheriff Rick Grimes to the balls-on accurate crossbow of Daryl Dixon to the downturned 'stache and suspenders of Hershel Greene, McArthur's creations pay homage to the cult hit with class, spirit, and even a strange tinge of festiveness that hasn't seemed to make it onto the show. Additional posters include Dale Horvath and young master Glenn.

Want to see other pop culture favorites in bare bones form? Check out the WWF Legends Miimalist Posters and the Superhero Minimalist Prints.

Add another wall to my shower? If it's the Nest Wall, I'm down. This new shower caddy uses magnetized bottles and bins to keep all your hair, face, and body grooming products both easily accessible, and looking sleek...

Red light, green light, wake up! Or prepare for the Squid Game Doll Shooting Alarm Clock to eliminate you. ... OK, she'll just pelt you with a foam bullet, but still. This piece of Squid Game merch might be the creepiest...

Cover up your bad hair, and score yourself some evil glares with Uncle Bekah's Inappropriate Trucker Hats. Mama may have told you if you don't have anything nice to say, don't say anything at all, but Uncle Bekah believes...

I know it's going to be a happy Mother's Day this year, when I give these Golden Girls Ankle Socks as a gift to my mama. A 5-strong set, with pairs mugging pretty damn accurate drawings of Sofia, Rose, Blanche, and Dorothy...