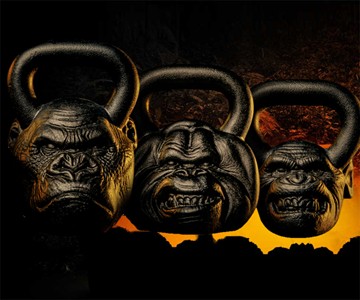 Onnit's Primal Bell beasts, hand-sculpted in howler monkey, chimpanzee, orangutan, and gorilla models, weigh 18, 36, 54, and 72 pounds respectively. In official Russian kettlebell measurements, that translates to 0.5 pood, 1 pood, 1.5 pood, and 2 pood. Though bells are fully functional, properly balanced, and feature enlarged handles for grip strength, fitness/great ape enthusiasts should be careful where they fling their pood, as hitting another person with a kettlebell has just as many repercussions as suffering pood impact yourself.

If you truly feel you are in the company of someone who deserved to get pood on, click here and at least make it happen anonymously.

Thanks to Bruce for the Dude Product Tip.

With the Bellabooty Belt, you can "hip thrust anytime, anywhere!" And just like that, all your problems - maybe even all the world's problems - are solved!...

Tempo Move - Home Gym in a Side Table