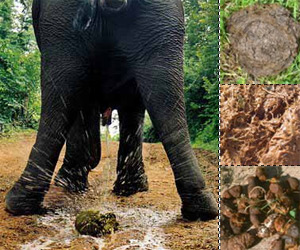 If you know a lot of assholes, you know what it's like to deal with their shit. Now, it's time to return the favor. ShitSenders.com enables the shat upon to send steaming piles of Don't get mad, get even to inconsiderate, self-important, obnoxious, or otherwise turd-deserving recipients. Anonymously. Exes, evil bosses, crooked mechanics, Nancy Grace--the shit storm is brewing, and when it hits, it'll be freshly-packed and delivered deliciously ripe right to their front doors.

From cow dung to elephant excrement to a gorilla's #2 (the most human-like in both appearance and fragrance) to an extra-special shit of the month, ShitSenders.com goes above and beyond the typical inventory of bull shit, stocking a bona fide shateria of stench. All flavors are available in quart and gallon sizes, and range in price from $12.95 for a quart of moooon pies to $23.95 for a gallon of gorilla rectal rolls.

Like the most professional of psychotherapists and prostitutes, ShitSenders.com promises to keep its clientele 100% confidential. While you won't get to see the shit show unfold--and, depending on the level of humiliation it generates, may not even hear about it--you can rest assured its private audience will never tie your name to the production team. Embedded in the pile o' poo is an oozy-fonted greeting card reading, "You've been pooped on, want to know by whom? OVER." And on the flip side: "We'll never tell."

So what are ShitSenders.com users saying about the service?

And how about the lucky SOBs on the receiving end?

"I have received two packages of shit in the last 2 weeks. I know it's somebody in the office. So who ever is doing it the joke's over quit sending me shit." -Jeff, Downing Lake Grove, NY

On behalf of ShitSenders.com, we'd like to remind you that if you've been scorned, wronged, taken advantage of, or pranked one too many times, you have only two options: keep taking that shit, or start dishing it out.

November 2014 Update: We have received so much negative feedback from readers who have ordered this product and never received it that we are removing the link to its purchasing page and listing it as Discontinued. I guess if you truly want to give someone shit, you have to dole it out yourself.

Swimming Poo's STEAM blurb describes it as "a humorous action game," but that's about as full of crap as Swimming Poo itself. Humorous? If your favorite jokes start with "Pull my finger," or "So I was taking a dump the...

Both the best and the worst part about the Kama Pootra is that many of its 52 Mind-Blowing Ways to Poop turn a visit to the crapper into a group activity. I mean, on the one hand, who couldn't use a little help pinching...

When mere pushing, grunting, and clenching every other muscle in your body while sitting on the toilet doesn't work, use The Force. Or at least stare at this Use The Force bathroom art hanging on the wall for some comic...