Presenting the Alphabet: 16 Gifts that Start with I 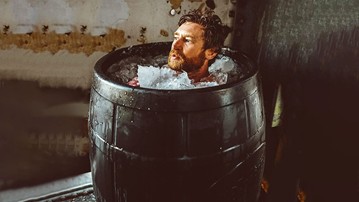 I've compiled 16 gifts that start with "I," but don't worry. Only one of them starts with "i." And it's an iParody, not another expensive Apple device, or internet-based smart home product that's going to be a bitch to set up, and stop working every time your WiFi has a hiccup. My goal was to give you I gift ideas that won't make you ill or in need of ibuprofen. Hope I did good!

Note: All alphabet gifts are priced as they were at printing on November 14, 2022. Pricing, and availability, are subject to change.

Sort of just another take on the car alarm, this gadget is designed for use on any vehicle, but especially convertibles that thieves, or social media influencers trying to look more influential than they are, can just reach or climb into to steal or record a TikTok video. When installed, the Invisibeam creates an invisible sensing field around your vehicle that detects "moving high-density objects" (i.e., people...or meteors, I suppose) crossing its threshold (i.e., getting too damn close to your car.)

The Invisibeam projects both an outer and inner field. Tripping the outer sensors will activate a WarnAway message in the form of siren chirps. Crossing the inner field unleashes a full-blown alarm.

Now that Star Wars Sunshade season is over, it's time to haul out the Wampa Ice Mitt. Or take iceScreen's advice and chuck the scraper in a dumpster. iceScreen creators Dan Miller and Andy Wright have developed a magnetic windshield cover they say will eliminate the need to scrape a snowy or crystallized front window ever again. And if you find yourself at odds with the Millennium Falcon crew next June, you can also flip the iceScreen over to reflect the sun and keep your car's innards cool in the summer.

Anti-chicken-choking and monkey-spanking pages appear as full-color images of sometimes-bizarre, always unsexy objects and scenes. Well, except for the one of the guy in the woods wearing tighty whities and a rabbit head. That's hot.

Has it been a while since you've done an ice block shot? Too long? And I'll bet your stuck-up Aunt Jan and Great Uncle George have never done one. Know what that means? It's the perfect addition to Thanksgiving dinner and Christmas morning.

Nice. A condom to carry my message to all the unborn children in the world. Attention would-be zygotes! I WILL NOT BE YOUR FATHER!

However, I would still very much like to bang your mother!

I actually can't say this too often but yeah, I'm the Dude. And yeah, Iglucraft, I want that. Iglucraft handcrafted saunas and cabins are 1-person to family-sized outdoor retreats. The former is of a hot spa-like persuasion to soothe the body, and the latter a weekend - or backyard - getaway to ease the mind.

Iglucraft builds Igluhuts and Iglusaunas to suit various buyer needs and preferences, but all of them share their charming shingle siding and quaint domed shape. For the Iglusauna, the curved design is also functional, allowing steam to travel upward from the central heater, and then drift back down along the side walls once it hits the ceiling, to fill the entire space quickly.

I don't like the Icky Stick just because I get a kick out of its branding schtick. I mean, that's the biggest reason, but so too am I interested in this hand pipe's claim that it has been "specially designed to provide an unbeatably smooth smoke." Whether you're using tobacco, or another of your precious herbs.

Backed by solid reviews and a shiny, bullet-shaped body as smooth as its hits say they'll be, the Icky Stick aims to smoke out other handheld pipes with its interior maze filtration system. Once lit, this labyrinth directs smoke along a 32cm maze path, cooling it to happy sloth levels of chill before the clean, mellow toke touches your tongue.

Doc & Phoebe's Indoor Hunting Cat Feeder gives your feline friend the chance to play cat and mouse every night, in the house, and without a dead rodent at your feet as the endgame. Stimulating cats' hunting instincts, the mouse-shaped, bowl-free feeders help keep them from getting bored indoors, plus keep them active as they stalk the little sucker down, and dig claw-and-tooth into its small top openings to extract the mouse's kibble guts.

Ergonomic nightmare of a round mouse included! The iBot G3 is a sweet little desktop toy and tribute to Apple's iMac G3 from Classsicbot, a brand devoted to "classic computer designs and geek culture." It arrives on the heels of the original iMac's 30th anniversary (August 15, 2018) to say, "Hello," and remind you what you loved, or hated, about the computer that launched Apple's resurgence in the marketplace, and set Steve Jobs on his path to becoming a Tech God.

Making minor decisions is one of my least favorite activities in life, so Inconsequential Dilemmas: 45 Flowcharts For Life's Peskier Questions is like a gift from the Baby Jesus - or Santa Claus, or the Easter Bunny, or one of his other representatives - to me. Can I park here? Should I eat this street food? Am I too old to be at this party? I don't know, but in clear, straightforward, and illustrated form, this book is going to give me the answers to 44 questions I wrestle with on a weekly basis!

I say 44, not 45, because the answer to the question of whether or not I should eat food I just dropped on the floor is always a definitive Yes.

The biting morning cold. The cringey sound of the scraper. The reach across your windshield that has a 50/50 chance of tweaking your back. The damp, frozen, useless hand you're left with right when it's time to grip your steering wheel and take control of a 4,000-pound vehicle. Winter sucks.

And these Ice Scraper Mitts aren't going to make winter suck any less, but they might do you a favor when it comes to the part of winter that sees you chipping away ice, and clearing the frost and snow off your car's windshield and windows. The mitts are essentially giant, fleece-lined mittens with hard plastic ice scrapers stuck inside. The outside of the mittens are made of a waterproof material, so your working hand stays both warm and dry during use.

And the best part is, the Icepo Perfect Portion Ice Cream Sandwich Scoop scoops out perfect, 1/2-cup portions to make ice cream sandwiches out of store-bought cookies, so it's even less work to make yourself a delicious ice cream sandwich as a reward for a hard day's work writing about Icepo Perfect Portion Ice Cream Sandwich Scoops.

The Icepo is made up of a stainless steel cutter and high-tensile wires maker Dreamfarm says will easily push into - and then push back out - all types of ice cream. Smooth and chunky, icy and creamy, real and fake (i.e., vegan) alike. The Icepo has a one-handed design, with directions to push-and-twist to cut into and grab a hunk of i.c., and then hit the Eject lever to spit it back out onto your chocolate chip or butter toffee plate.

A dude in an Ice Barrel? A 100-gallon barrel filled with water and...ice? This photo is a still of a torture scene they're filming for some, like, Russian spy movie right? Gah! And I thought the Glacial Shower was a ridonkulous idea. Listen, I know athletes and crazy Dutchmen use cold therapy (cryotherapy if you're fancy) for everything from recovery to rehab to stress reduction to depression and anxiety relief, but, but...can't I just take a pill for all those things?

Oh, and this is the best - and by best I mean worst - part: the Ice Barrel is designed for year-round outdoor use. It will cool you off on a hot summer day, or help you "embrace your inner polar bear in the middle of winter."

In a Galaxy Far, Far Away

Who knew The New York Times has chronicled the Star Wars saga as hard as the rest of us fanboys and girls out here? The only difference, as you might notice in their In a Galaxy Far, Far Away coffee table book, is that the Times' coverage is a little more journalistic than, say, my review of the Return of the Jedi Wall Clock, and slightly better written than my short story on a Chewbacca-Leia love affair (will spare you a link to that one.)

The I F**king Love You Morse Code Necklace from Cursing in Code falls somewhere between an engagement ring and the You Is Fine Bears when it comes to gifts for your girlfriend that will make her heart melt this holiday season.