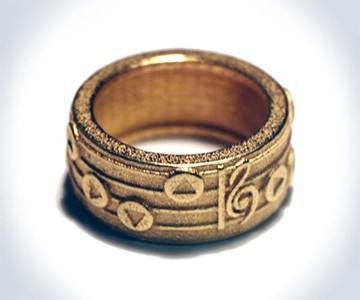 Can you play the ocarina? Yeah, me neither. I took piano lessons when I was a kid, but after I learned the Top Gun anthem and the theme from Jurassic Park and then refused to play anything else my teacher suggested we part ways. Hi Mrs. Rapp! My point is, while I think the 12-hole ocarina from The Legend of Zelda is rad to the max, I'm not sure I could make the most out of owning one. Not like I could one of these Zelda songrings carved with the notes to memorable tunes from Ocarina of Time. They may be even cooler than the instrument that inspired them, and their usage requires no skills. That's a perfect fit for me.

Zelda songrings sell individually for $59.99 or as a complete 12-ditty set for $399.99. Songs in the ring repertoire include:

Collide Rings, a set of connecting engagement and wedding rings for men, are for all the dudes out there who want to show the world they're taken from the moment their lady says, "Yes." Or, I suppose, Collide Rings are...

Welp, it's better than having a viper around your neck. This Viper Ring turns the Mangshan pit viper into a beautiful, formidable piece of jewelry. Its head sits atop your finger, while its body, er, snakes around either...