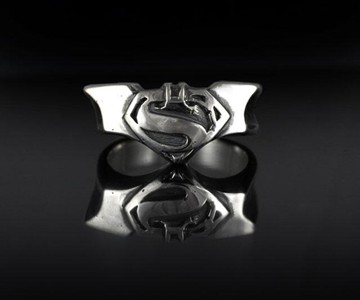 As the DC Cinematic Universe plans to do in 2016, Matt Watkins of Earthforge combines the Batman and Superman logos in this sterling silver Batman v Superman ring. And like all items sold through online marketplace Custom Made, the BvS ring is hand finessed to order. In addition to specifying size, buyers can select their preferred finish from high polish (smooth), oxidized, or brushed/distressed.

Watkins himself is a BFA-holding jeweler and metalsmither out of Bocabec, New Brunswick. He also Earthforges a gallery of additional fine baubles, including the geek's candy store of rings with this Superman/Batman/Avengers/Star Wars/X-Men combo.

Batman v Superman: Dawn of Justice, by the way, is set to release in the US on May 6, 2016, and will serve as the sequel to Man of Steel. Henry Cavill will reprise the role of Superman and, as many fuming franchise and comics fans already know, Ben Affleck will take on Batman.

The Batman v Superman Ring is a top Dude Gift for a Geek pick.