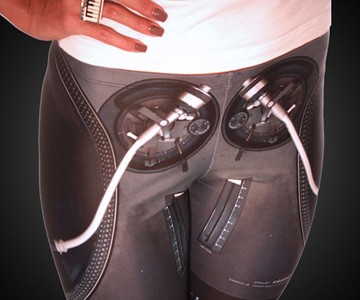 I have to admit, part of the reason I like these DJ Leggings is that they make it look like you can just temporarily unplug a girl's tubes to keep her from getting pregnant. Which, to whomever out there is working on the creation of human cyborgs, is a feature that should be folded into your first generation. And even though designer The PussPuss claims their Italian fabric tights were crafted in the image of the Stanton M 207 Battle Mixer and Technics Turntables, judging by the company's own name, I don't think my interpretation is too far off the mark.

In addition to the fallopian tube/turntable arm front side, I admire the LP record butt cheeks on the leggings' back side too. The rest of the buttons and knobs and sliders also round out the equipment nicely, rendering the DJ Leggings one pair of musically-minded pants I'd pay $20 bucks to see spin in just about any club.

The LaserCube is the latest DIY laser adventure from Wicked Lasers, creators of my favorite balloon-popping, wood-searing S3 Spyder III Arctic Laser. When it came out, the mad light scientists called their Arctic the...

Believe the hype. Live up to the hype. Be your own hype man - or lady - and annoy the ever loving hype out of everyone around you. All with a single press of The Hype Button, a battery-powered sound machine that blasts...

Yep, Alona Dudich's Music Pillows look exactly like the types of synthesizers and mixers an experienced DJ would let me use to show off my own skills in the booth. Hey Mr. Tiesto! I think something happened to your turntables...

Is that an EDM show in your pocket or did I just lick a stamp I shouldn't have? Budding DJs, club kids, and general jams lovers alike, you can create big sounds using no more than your thumbs and one of Teenage Engineering's...

Cardboard goes from breakdancing dance mat to breakdancing beat maker with Rhythmo's forthcoming BeatBox. The DIY music maker is designed for budding producers and DJs who don't yet have the skills or cash to invest in...

Everyone suspects that their cat is a pretty decent DJ. But does your cat have what it takes to spin at the big Vegas venues? Could he host a Kardashian party... the ultimate gig? Don't just throw him directly into the...

When it comes to synthesizers, the OP-1 is a portable powerhouse...that you'll pay for. The mini synth from Teenage Engineering is a hefty investment for budding DJs, musicians, and music producers, but one that will...

Mix tracks, play DJ, and throw down to win with the DropMix Music Gaming System. Up to 4 players draw hands of DropMix music cards, each containing songs by popular artists. Placing a card on the DropMix board activates...

Now what is this little doodad thingamajig Loopy Lou BrandNewNoise has made for us? Inside the Loopy Lou Voice Recorder box are the makings of hours of warping fun with voice recording and looping tech. The box itself...