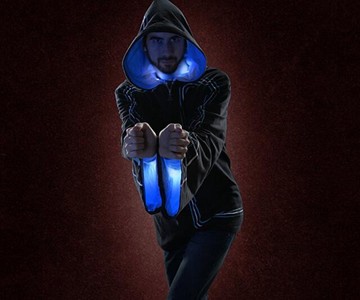 The Technomancer Digital Wizard Hoodie is one of these products. But while it's finally in existence, it won't be around for long. This might be the most coveted conceptual-prank-turned-manufactured-goldmine there ever was. ThinkGeek has even placed a purchase limit of 2 per customer on the hoodie due to its popularity and extremely limited stock. So right up front I'm telling you, if you want it, get it before the magic disappears.

Now about the Techmonancer's digital glow and wizardly powers. Its "spell effects." Apparently they take time to master and can be wielded only by those with patience, skill, and either Gandalf's or Saruman's bloodline*. Each of the garment's 9 programmed spells presents differently, both visually and audibly, and requires a different series of arm gestures to cast. The spells are named: Electroshock, Thunderbolt, Restore Health, Fireball, Shockwave, Energy Beam, Raise the Dead, Warp, and Water Bending.

If you master all 9, the hoodie unlocks a bonus spell either to manifest an Oculus Rift on command, or manifest Olivia Munn on command. Which of the two is dependent upon on what the sage Technomancer wisdom determines its wizard needs most.

The Technomancer Digital Wizard Hoodie functions in conjunction with an embedded speaker and over 2 dozen multicolored LEDs, the latter of which thread through both arms and the hood.

*Note to Saruman Descendants: ThinkGeek takes no responsibility for those who use the Technomancer for evil.