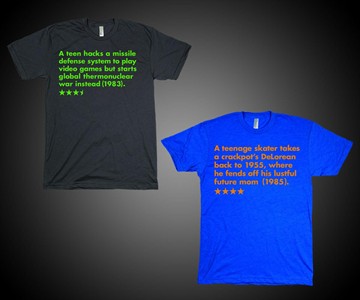 You might think cinematic masterpieces such as Rocky, Star Wars, Back to the Future, and The Karate Kid are too densely packed with plot and profundity to encapsulate in just one sentence, but Mike Joyce's Stereotype Design has taken on that very task with these Single Sentence Film Summary T-Shirts. It was a challenge formidable, but, as the following lines prove, not insurmountable for the New York-based studio.

Can you name that film?

Note: While I commend Stereotype Design's succinct and telling synopses, I have to take issue with their rating system. The Wizard of Oz gets 4 stars but Top Gun gets only 3? As Ice Man would say: [cough] "Bullshit."