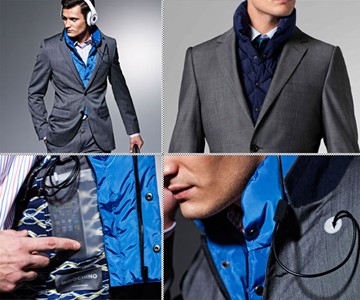 Style. Connectivity. Protection from hypothermia. When 21st century power players dress to impress, kill, or otherwise command the respect of their minions, they wear Indochino's Nanotech Storm Suit. Disclaimer: If you are going to continue reading please note that, for better or worse, the Nanotech Storm Suit bears no resemblance or relation to anything from Star Wars. Rather, this sharp assemblage of rat-race-routing threads earns its title from three major components that render it superior to similar business attire by Bill Blass, Hugo Boss, and your birthday.

One. The Smart Pocket. A touch-responsive smartphone cradle is sewn into the interior left flap of the Storm Suit's jacket. Waterproof and dry-clean friendly, the pocket also has a metal earphone cable clip and rubber earphone hole to keep cell accoutrements organized, untangled, and out of the hands you'll need for shaking on multi-million dollar deals.

Two. The Storm Flap. A navy, light blue, or orange...I don't want to call it a bib because that sounds lame, and I kind of have a decidedly un-lame, Bond-type vibe going for the Storm Suit here, but...it's a damn bib. More specifically, it's a detachable, duck-down-filled, not altogether bad-looking bib that slides and buttons underneath the jacket to insulate natural body heat and keep winds and cold temperatures from pummeling you in the chest and neck.

Three. Nanotech Radness. Natural and test tube fabrics unite to put the "Nanotech" in our Storm Suit. The jacket and pants repel liquids and stains (pretty darn well, if the above video is to be believed), as well as resist odors* and wrinkles without compromising breathability, comfort, or sharp dressed man aesthetics.

*PS: I flew to DC over the weekend, and I swear to every BBQ baked bean I've ever eaten in my life that someone in my vicinity was unleashing the most suffocatingly vile, wet farts over the course of the entire 4-1/2-hour flight. Now I'm sure we've all had some bad gas in our day, but I don't think I've experienced toxic bio-fumes that heinous lasting for that long in my 3+ decades on this earth. Every time another sulfuric bullet would shoot its venom into my olfactory canals I would think, OK, this has got to be it. And then, 8 to 12 minutes later...the GI tract from hell somehow replenished, reloaded, and re-flippin'-fired. The breath of Satan could not smell any worse than the ass I traveled across the country with last Friday afternoon. Man, I wish I'd had a Storm Suit on that airplane. My head would have been driven so deep into one of its Nanotech odor-resistant sleeves the first person able to pull me out would have become King of England.

I'm dude enough to confess that I just panic bought two First Minute Vest wearable survival kits after reading an article my mama emailed me from Wired entitled How to Prepare for Climate Change's Most Immediate Impacts...

How long has it been since someone said your penis looks "dapper?" For me, the answer is an emphatic "too long." The same goes for "snazzy," "handsome," and "just like Jon Hamm." I can only hope LELO's new TUX, a penis...

I was recently at a bar for happy hour and it was jam packed with 1) Amazon employees and 2) Amazon employees' backpacks. I felt like I was at Adult Latch Key. They got let out of work but their mamas couldn't pick them...