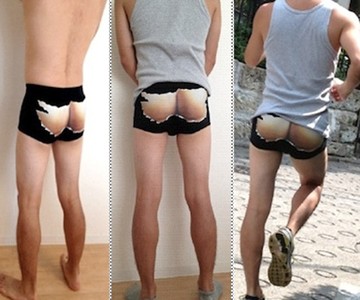 $60
from Japan Trend Shop »
Check It Out

2. Suitable for jogging and, presumably, other cardiovascular pursuits.

3. Created in the likeness of a butt so impassioned and hard as steel that it F'ing BURST! through its cotton containment to become the Incredible Hulk of posteriors! The redefinition of butt rock! The hardest hard ass in the land!

If you've been searching our Gift Guide for a token as ass-flattering as it is asinine, Butt Reveal Underwear won't just reward that special dude or lady on the receiving end of your generosity with a heaping dose of baby got back, they'll throw in a bonus shot of baby got crack.

As long as s/he wears a Large, because Large...and in charge...is the only size Butt Reveal Underwear come in.

Then again, that's a Japanese size Large, so it's probably more like Large...but still small enough to sleep in Kramer's dresser drawer.

And you thought corn dogs plugged you up before. This Corn Dog Butt Plug from Glow F Yourself does double plugging duty too - the metal or silicone end plugs into one willing participant's poophole, and the breaded meat...