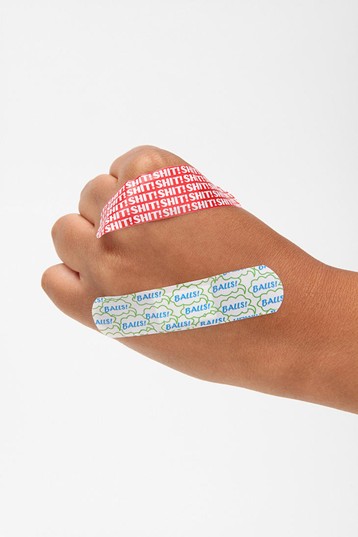 $7
from Urban Outfitters »
Check It Out

Most of these obscenity bandages seem apropos for the injuries they will cover, but who yells, "Balls!" after slicing through Tallman instead of the onion? Seriously, is "Balls!" really anyone's go-to vulgarity when overcome with anger, pain, frustration, or sadness? The Australians, maybe? Or is "Balls!" intended for use in conjunction with another bandage to treat larger abrasions, and form a compound crudity? For example, "Fuck!" also appears to be included in the 25-pack. Together, "Fuck!" and "Balls!" produce an obscenity that is both recognizable as part of the American English vernacular, and hilarious. Perhaps "Sick!" is also in the bandage collection. Even one of the display photos has opted for "Shit! Balls!" which is somewhat more identifiable as an exclamatory, but also kind of gross.

The ClampTape, a clothespin-shaped tape dispenser you can clip on any narrow edge, is some good stuff. Well-conceived, seemingly well-executed, space-saving stuff. I think the idea's gonna grip consumers, and stick with...

Just one question about the TempTooth Temporary Tooth Replacement Kit: does it come in gold?...

Call CureFaster a magic wound wand. One that says it can take you from cut to clot with a quickness. From scrape to scab in 3 treatments. From gory gouge to...still pretty ugly injury, but less likely to bleed and ooze...

A dude in an Ice Barrel? A 100-gallon barrel filled with water and...ice? This photo is a still of a torture scene they're filming for some, like, Russian spy movie right? Gah! And I thought the Glacial Shower was a ridonkulous...

microMend Emergency Wound Closures give new meaning to the term "pinch one off." Marketed as a quick, safe, and way less expensive alternative to heading to the ER for stitches, microMend closures can seal lacerations...

Great. Now kids are going to start breaking one another's arms just so they can get a sick 3D-printed cast with attached bone stimulator to set and heal it. I mean, that's what I'd do if I were a kid. OK, maybe with a...

Haha, Mama, no excuse not to hang every one of my photos and pieces of artwork on the fridge anymore, now that I'm giving you this neverending* roll of Adhesive Magnet Tape! It's even specially formulated for thin, low-profile...