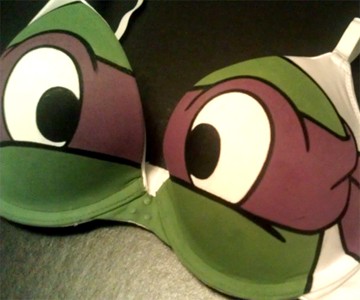 Some would say the Teenage Mutant Ninja Turtles are making a comeback. LL Cool J would probably say don't call it a comeback, they've been here for years. Teri Hatcher and John Travolta would warn Leonardo, Michelanglo, Donatello, and Raphael to tread lightly on this resurgence of fame, as it can all be gone again in a matter of one bad season on your trashy primetime soap opera, or a few harassment allegations from your male massage therapists. Etsy vendor Ms. Sceene Shoes, and now I, and now probably you would say: Boobs.

The Teenage Mutant Ninja Turtles Bra pretty much represents the greatest nod ever to one of the most iconic cartoons of the 80s and 90s. Men, can you just imagine for a second the Cowabunga! you would feel if upon taking a girl's shirt off for the first time you found yourself face-to-face with both her bodacious breasts and the radically bandana-ed eyes of Leonardo? It would be one of the top 3 moments in my life. No question.

On the downside, I almost think if it actually happened to me, anything beyond second base at that point would be a disappointment.

TMNT Bras are each hand painted in acrylic with the buyer's choice of Ninja Turtle. The design is permanent and washable, and comes with accompanying care instructions. Because ladies, this is one boob koozie you are going to want to take very good care of. Trust me, it will carry you far in life and return to you pretty much anything you desire. Presents. A husband. A high five from God.

However, a word of warning from the bra's creator: "PLEASE REMEMBER THAT I CANNOT READ YOUR MIND. If you do not let me know which turtle you want in the Notes box at checkout, you will receive Donatello." Those might be the best lines I've ever read in an Etsy listing. I would like to reiterate the first of them to every woman I have ever met. As for the second, ha! HA! Donatello is the default turtle. I sense--or maybe I'm just making it up in my head because it's funnier that way--a drop of malice in Ms. Sceene Shoes' statement of this fact. As in, all of the idiots who can't follow simple directions and specify which shelled cartoon reptile they prefer are getting a boobful of the supreme Ninja nerd with the purple bandana and bo staff. I bet she even paints him with a lazy eye.

Bras come in pretty much any size you want, ladies, though the especially endowed of you may be upcharged $5 to $10.

LED pasties glow so bright you can even see them through a T-shirt! So ladies can don a pair without exposing the Breasterson twins! And...wait, that's a selling point? Wamp, wamp. These pasties suck. Unless you wear...

Ladies, want some kitties for your titties? And your kitty, because this black cat bra also comes with a matching thong. The lingerie set from Adore Me adds a pair of cute cat pasties to an unlined black tulle bra, plus...

If you're in the market for a low-key Super Mario Bros. group costume this Halloween, have I got a Turtle Shell Hat for you...

Solid Gray has given the Teenage Mutant Ninja Turtles a makeover for the 2010s and invites you to play an active role in the re-imaging with their hardshell backpacks. The 4 color schemes available highlight general rebranding...