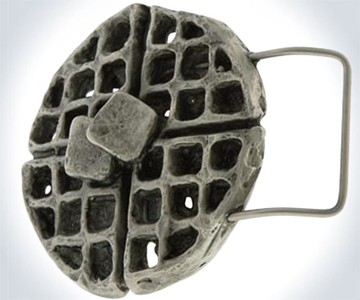 All I need is this ring, and I'll be a delectable man plate of chicken & waffles. As for the Waffle Belt Buckle itself, I don't think anyone can better describe its appeal than creator, Jon Wye: "For people who wish they could pour syrup on their crotch all day long but are prevented by social convention." Ahh, like I said, bring on the chicken.

The breakfast and ice cream sandwich champion...oh man, when my mom used to make me go to this flea market in Belleville, IL with her, they had the best waffle ice cream sandwiches. Sometimes I got five or six, and they made every second I had to stand there while she haggled with old men two puffs away from full-blown lung cancer over pink porcelain and rusty kitchen gadgets from 1907 worth it. Anyway, Wye's waffle belt buckles are made of silver quality pewter and affix to belts up to 1-1/2" wide.