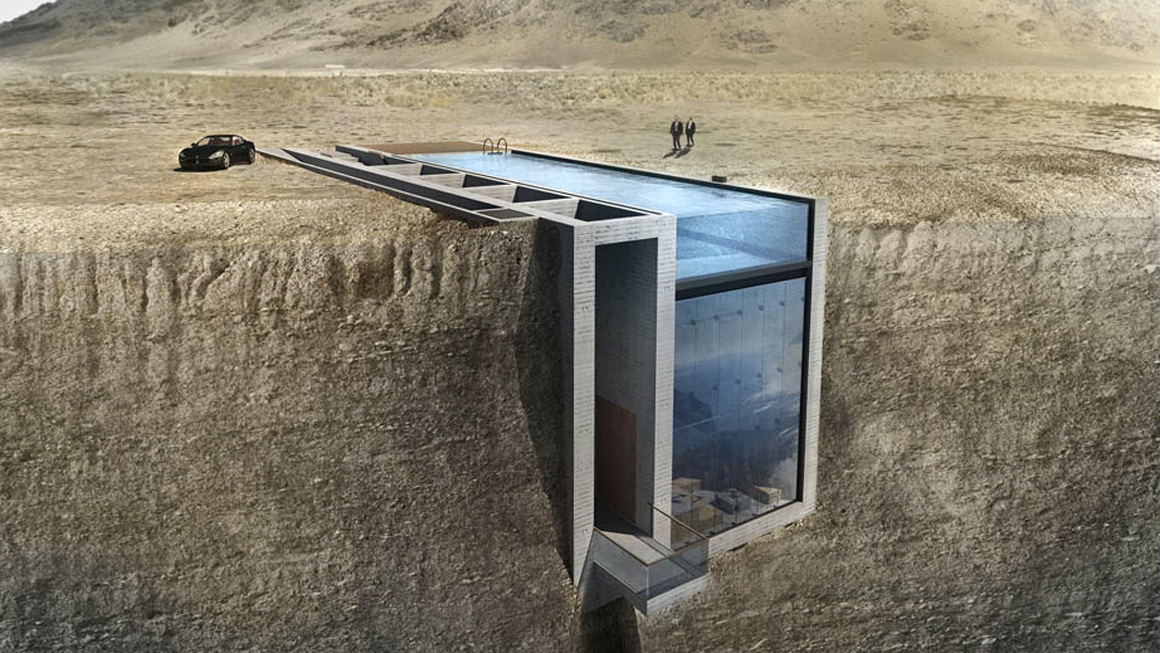 "Casa Brutale redefines the harmonious coexistence of human and nature in a poetic homage to pure Brutalism*." I think that's just OPA's elaborate way of saying, "This badass house does not actually exist." And that's is both the most brutal truth and the most brutal of truths about Casa Brutale, which is otherwise phenomenal in every way.

Taking the Villa Vals built-in concept a huge step further--though again, only in concept--Casa Brutale carves out a chunk of a Greek cliff and then sets its trio of concrete slab walls inside. The fourth wall? A giant piece of glass sure to send any acrophobe straight to his grave. Brutale has the aquaphobic covered too with its glazed-bottom swimming pool serving as the house's roof. Both the front wall and overhead pool should let in plenty of natural light and give voyeuristic rock climbers and hang gliders a terrific show. Accenting Casa Brutale's concrete and glass majority are small details of black-coated steel and brown/red-aged wood.

In addition to illumination and sick visuals, Casa Brutale's land-penetrating design gives the house thermal insulation from the surrounding ground and cooling properties from the swimming pool. Completing the exterior aesthetic is a flight a 50 stairs leading from the top of the cliff to the front entry, also accessible via elevator.

Inside, minimalist lines and finishes fill the house. On the main floor are a dining area, kitchen, fireplace, and guest room, plus hidden utility rooms and a bathroom. An interior set of steel stairs leads to a mezzanine master bedroom fitted with a concrete bed and walls covered in mirrors "to enhance the play between light and shadows." And, I would guess, to give the rich SOB with the money to commission a place like Casa Brutale a better view of himself boning supermodels.

*Brutalism, for those unfamiliar, is a style of architecture popular in the 60s and 70s that's known for its "ruggedness and lack of concern to look comfortable or easy" (thank you,Wikipedia). Not surprisingly, its design elements were incorporated most frequently into government buildings.