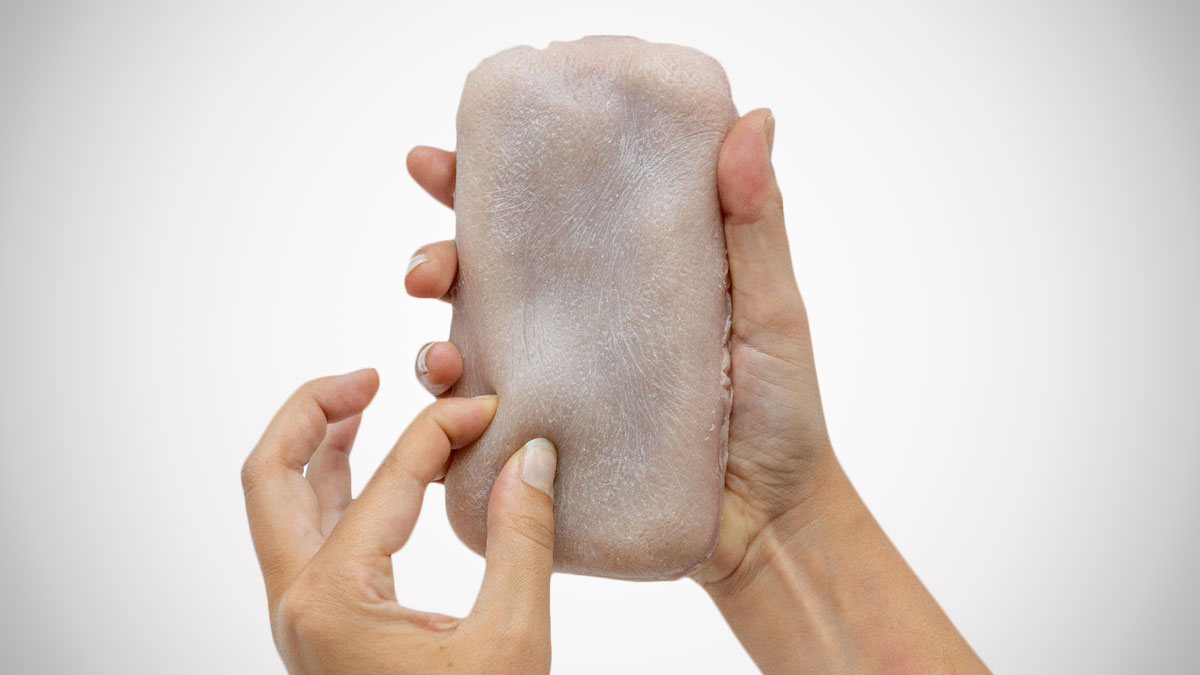 With his Skin-On Interfaces project, HCI researcher and interaction designer Marc Teyssier is trying to improve humans' experience interacting with our devices. He points out that we use skin as an "interface" when we interact with other people - I guess meaning we use our sense of touch and things like hand shakes, hugs, kisses, and the bump 'n' grind - but when we do the same with "objects of mediated communication," such as smartphones and computers, we must deal with their "cold interface that doesn't allow natural interaction and input."

So, nope. Skin-On Interfaces is not a joke like the Harambed, or even a novelty like the Pop It Pal, it's a legit attempt at solving a legit problem Teyssier sees as a side effect of the advent of technology and the time we spend with our devices.

In action, Skin-On Interfaces (still just prototypes and tests) acts as "sensitive skin-like input methods than can be added to existing devices to increase their capabilities." Teyssier has attempted to reproduce your epidermis' visual, tactile, and kinetic traits in his smartphone and trackpad covers. I can't speak to all three, but if his tactile and kinetic results have been as successful as his visual attempts, I'd say Teyssier has a human skin hat trick on his hands. Literally.

What do you think? Skin-On Interfaces: cool concept, or things that make you go ewww?

I don't know what medieval witch magic Baby Foot puts in their Exfoliant Foot Peel to produce the skin-molting effects you see before you but, even though it would make perfect sense here, I promise you it's not snake...

Meet the NOTA Mole Tracker. Despite its name, it is not not a mole tracker, it is a mole tracker. A gadgety wand of a mole tracker that's compact, safe for everyone, and made for consumers to use at home to help with...

The Micro TagBand skin tag remover is a tiny, low-tech tool for popping off bulbous mounds of excess flesh by way of slow strangulation...

Wait, so there's an alternative to just blowing in it first? This cutting-edge piece of technology from Fleshlight may look like a sex toy for your girlfriend, but it's actually a pleasure enhancement tool for you. The...

My appreciation for wipes has grown exponentially as I've gotten older. Now I'm mostly talking about the wipes used on the opposite end of the body as Anthony Glycolic Exfoliating & Resurfacing Wipes, but I've also developed...

Pimple. Zit. Acne. Pus volcano. Blemish if you're being fancy. The Mighty Patch Pimple Patch destroys them all. At least according to Mighty Patch themselves, who say their medical-grade hydrocolloid sticker "absorbs...

Your dermatologist would probably say 100% no. You should not use a Raizen Mole & Skin Tag Removal Pen to remove warts and moles and freckles and other spots at home. Such self-administered skin procedures are ill-advised...

As if it's not bad enough my mama still nags me to wear sunscreen, now she's gonna slap a SPOTMYUV sticker detector on me everytime I go to her house so she can nag me to reapply it. SPOTMYUV is a color-changing UV detection...

Panama Jack left the neon zinc oxide sunscreen game too early. Now that fluorescent orange, yellow, and pink are back--in a full-on, legitimate, non-humorous, non-ironic sort of way no less--I have to give a shout out...