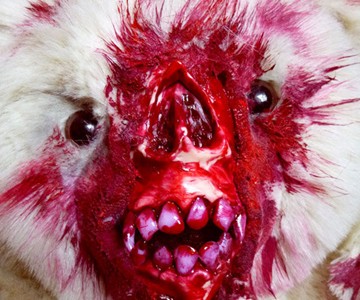 Whoa. I thought the scariest thing I'd ever seen was a real live British boy who looks like Chucky, but Undead Teds have staged a coup and now reign supreme. Even if they don't have the same bone-chilling, soprano accent. Which they might. Teddy bear zombifier Phillip Blackman is English. Who's to say that while he's ripping out your stuffed buddy's stuffed parts and replacing them with bloody gashes and oozing organs, he isn't also teaching him to say, "I'm going to decimate your brains" with a glottal stop?

Blackman's Undead Ted creations all stem from customers' own stuffed animals--a favorite childhood toy, a recent drugstore purchase, your ex's most prized polyester-filled possession, which you stole from her the day you went to collect your stuff after catching her in bed with the personal trainier you've been paying for--mailed in for irreversible treatment in the form of open wounds, exposed bone, and disturbingly realistic gore. Every zombie plush is unique in appearance, though, like Axl Rose, all share an appetite for destruction.

Roll the bones, baby! No question why the term applies to these Skull Dice, but do you know why playing dice not stylized to look like human skulls is also referred to as playing "bones"? Yeah, me neither. You should...

A classic from Seletti, the Love in Bloom Porcelain Heart Vase goes full-on anatomical in its efforts to help you show how much you care. The vase turns arteries and veins of the heart into individual bud vases, allowing...

If your life could use some peace and tranquility, look no further than the Resting Bear Ottoman from Design Front. I guess I should throw cute preciousness in there too, since ol' Resting Bear is really tugging at my...