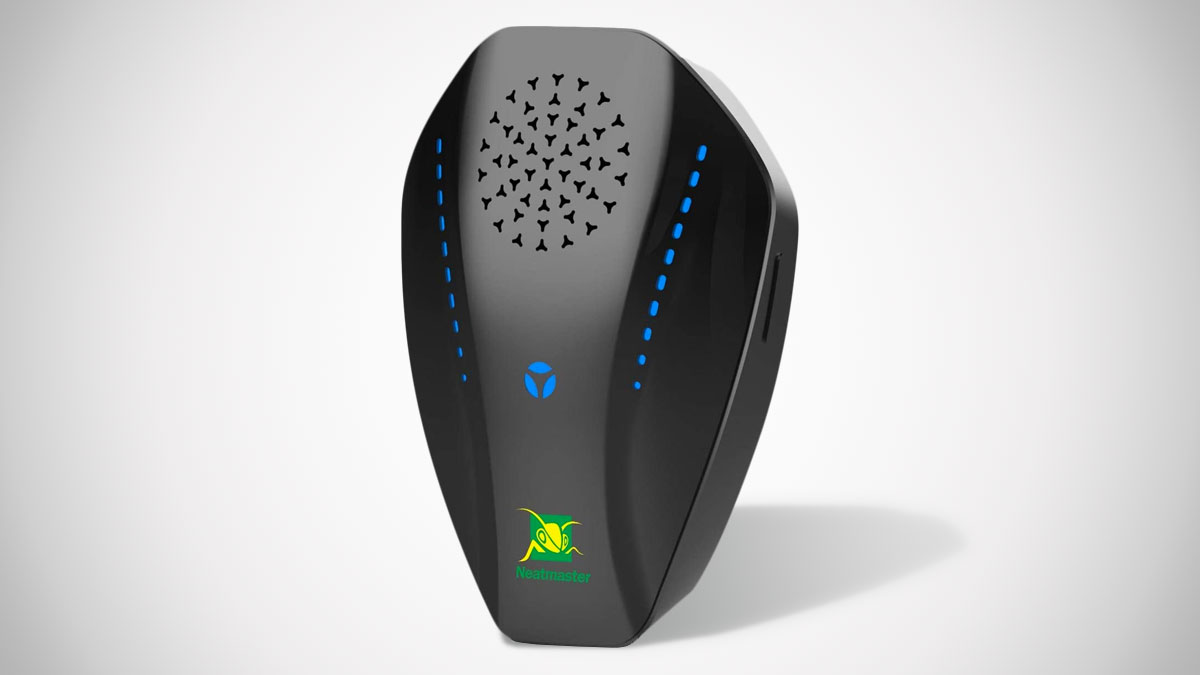 Paranoia, paranoia, bugs and rats are comin' to get me! That's what I sang to my mama when she asked me to install some Neatmaster Ultrasonic Pest Repellers in her house, even though she hasn't noticed any "particular problems" with the spiders, ants, mosquitos, roaches, or rodents the device is designed to keep away.

The pest repellers plug into standard outlets and have 3 levels of sound-splaying settings, green, blue, and red for light, medium, and severe infestations respectively. Click through them using a button on the side of the Neatmaster device before settling on one. Probably not the red one.

Because the red one - holy sonic attack, Batman! This setting, rightly, is not recommended for installation in any space you plan to inhabit or walk by while in use. I turned it on inside a crawl space under my mama's stairs and was like, Arrrggghhh! Mine ears! Mine ears! And I could still hear it even after closing the door and walking 10 to 15 feet away. The ringing stayed for a couple of minutes after I turned it off too, and that was after less than 60 seconds of use.

But the green and blue settings - I left Mama's on the latter - were inaudible to me. I don't know if they'll terrorize pets, my mama doesn't have any, but if it somehow keeps her neighbor's fat cat, Willard, out of her yard, she'll probably consider it a prime Neatmaster Ultrasonic Pest Repeller selling point. Willard is one of her (many, many) nemeses.

For the record, Neatmaster says the ear-assaulting red setting is the only one audible to humans and household pets.

So far my mama hasn't reported any suspicious pest activity, and those who have tried the Neatmaster repellers have pretty good things to say about them. They're certainly worth a try, given they don't require the use of chemicals that would hurt way more than your, your kids', and your pets' ears. The ultrasonic method also gives the pests you want to rid yourself of a fair trade: stay away from this unpleasant noise, and I won't kill you.

What do jelly donut stains, tarnished silverware, and a bunch of dirty carrots have in common? According to OmiSonic their new wireless ultrasonic cleaning tool can de-gunk and return all of them to peak wearing, using...

Three years ago Kite launched a crowdfunding campaign for their mosquito patch, a 1-1/2", non-toxic skin stick-on that blocks mosquitos' ability to track and detect humans for up to 48 hours. Since most people don't care...

If you loathe bugs and dread using chemicals to keep them at bay a PARA'KITO Natural Mosquito Repellent Wristband just might be the sweet chirping song of a budgie to your ears...

This mosquito-zapping camping lantern might not carry the same level of campground entertainment as the Bug-A-Salt Shotgun and The Executioner bug zapper racquet, but it does do double duty as UV bea

Let there be...BZZZZ! Dead mosquitos! Haha, suckers. You biting, blood-sucking, skin-disfiguring, Zika-transmitting SOBs. Fly into my pretty, pretty light. Because now the one that illuminates my back porch, my books...

I see your lighting of a citronella candle to keep the mosquitos away, and raise you bathing in the essential oil, rubbing it in soap form all over my body as a skeeter beater for all 2000 of my bug-averse body parts...

The Black+Decker Bug Zapper is an insect killer that looks as handsome as the house flies, mosquitoes, gnats, and wasps it bzzzzt!s will look nasty lying dead in a pile in the zapper's collection tray...

Suck it, bloodsuckers! The Biogents Mosquitaire CO2 outdoor mosquito trap is a scientifically-researched, German-engineered solution to bug bites, and their ruining of your backyard BBQs and summer evenings on the patio...

Nothing says Happy Mother's Day like a bouquet of sticky flowers caked with dead fruit flies and fungus gnats! ... And I'm only sorta kidding about that, especially if you need a gift for a mom who's also an avid gardener...