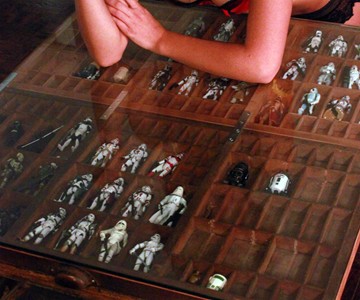 Could there be a more practical application for Star Wars action figures? I mean, aside from figuring out how to animate them, and building an army to storm the George Lucas compound? James Chillcott's mixed media coffee table began as vintage printing press trays and a pair of steel dock pallets. Restored and reimagined as a venerable showcase of the Republic, the cubbies display a diverse population of Storm Troopers, Clone Troopers, and other Imperial officers and droids spanning the majestic era of Star Wars mythology.

3/8" tempered glass, easily removed for action figure additions and rearrangements, covers the table, which is bound with black steel wire, and remains rough in appearance in a nod to industrial style. Should the wife be unwavering in her refusal to allow a duo of plastic Star Wars men and rusty metal as a living room centerpiece, the pallets and base may also be ground to a shiny steel finish.