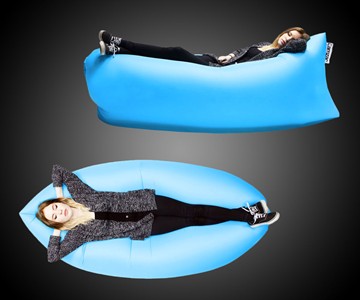 The Lamzac Hangout is a DIY cloud. Except made of solid nylon ripstop so you won't go crashing thousands of feet to the earth when you lie down on one. And also minus the ice crystals. Unless you decide to unfurl a Lamzac on a snowy peak like that dude in the photo. Oh for goat's sake. Edit: The Lamzac Hangout feels like a DIY cloud. The Dutch lounger fills with air in seconds for use as a seat or sofa, and then deflates, rolls up, and packs down into a carry sack just as quick so you can schlep it with you anywhere.

Did you ever float a plastic bag overhead to trap air in it? So you could tie it shut and then stomp on and pop it? The Lamzac Hangout inflates similarly, except you draw it through the air horizontally to fill it, and then plop down on it to take a snooze, drink a beer, or catch a show during festival season rather than trying to make it explode louder than your friend Cornelius'. Here's a GIF of what I'm talking about.

Lamzac Hangout creator, Fatboy, made the portable couch for travelers, campers, beachgoers, picnickers, people who nap in their office supply rooms, anyone who can make good use out of a relaxation station as compact and light as it is comfortable. Filled up, the Lamzac Hangout is around 79" long x 35" wide. It folds down to 14" x 7" and weighs 2.6 pounds.

Lamzac Hangout fabric is dire- and moisture-repellent, and washable with lukewarm water and neutral soap for use and a reuse all summer long.

Oooh, a set of suspension chairs from the Star Trek: TNG Ten Forward lounge. And to think I had almost given up on finding the perfect seating for sipping syntheholic beverages while playing games of 3D Chess and Strategema...

Lights...cooler...action! ... Oh wait, don't forget the beats! After all, it's the Frio Color-Changing LED Cooler and Bluetooth Speaker...

The size of a water bottle, 5 seconds to set up, 300-pound weight capacity - sometimes with a camping chair, everything just Cliqs...