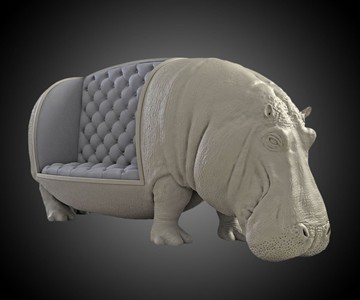 $95k
from Hammacher Schlemmer »
Check It Out

It's too late to say you want a hippopotamus for Christmas, but maybe if you're real good, kids, Mommy or Daddy (or Sugar Daddy, ladies) will get you a hippopotamus for Valentine's Day. This one you won't even have to feed. Requiring over 400 hours to craft by hand, this life-size Hippopotamine Sofa is both a stately sight for the eyes to behold and supple seat to behold the butt.

The tufted full-grain leather sofa is carved into the hippo's right side, while the beast's front, back, and left sides have been replicated in great detail and to its full dimensional proportions. Thankfully, though, hippopotacouch weighs in at just 198 pounds, not the same 3,500 as its living counterparts. This hippo is made of a steel frame covered in pebbled leather-like polyurethane to simulate the texture and look of the animal's skin. Another thing the furniture has in common with the real thing: price. Not that I've ever actually gone hippopotamus shopping, but I'd imagine if I did I wouldn't be able to find one anywhere for less than the $95,000 they're asking for this sofa.

Fun Fact: I bet you knew that hippos tend to be moody and aggressive, but did you also know that when something pisses them off they can run at a speed of 19MPH to catch it and kick its ass? If you're not Usain Bolt, better not piss off a hippo.

So this is where all the coral reefs have gone. Decorative console tables. Thanks, Design Toscano...

Bruce Shapiro's Sisyphus Kinetic Art Tables are side, end, and coffee tables whose glass tops reveal an ever-changing world of sand beneath them, occupied, acted upon, and altered by a small rolling metal ball. Shapiro...