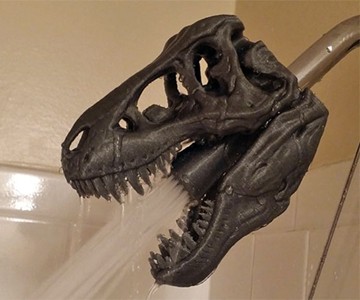 He may be dead and decomposed, but that doesn't mean T-Rex isn't still capable of spewing the stink off you. Roman Mirskiy creates his T-Rex Skull Shower Heads on a 3D printer. They're all made from high-quality ABS plastic, or the same plastic as LEGOs. (Tip: don't leave the shower head lying around on the floor.)

The next time you're looking for a gift for a geek, ask him what size shower pipe he has in his bathroom. If it's a standard 1/2", you've got a winner, winner Cretaceous dinner with the T-Rex Skull. It comes in white, green, blue, black, red, and yellow.

You can use the T-Rex Candy Dish & Valet Tray to hold your keys, coins, jewelry, or small pieces of EDC, but what the little dino really wants to keep contained and organized for you is a bag of M&Ms or Skittles. Some...

A Tandem Shower? That's waaay better than a tandem bike. Or, like, a tandem trip to the art museum. Good on you, Boona, for coming up with a way for my wife and I to spend more quality time together that serves us both...

Add another wall to my shower? If it's the Nest Wall, I'm down. This new shower caddy uses magnetized bottles and bins to keep all your hair, face, and body grooming products both easily accessible, and looking sleek...

Ice cold. Chilling. A slap in the face. Wim Hof. The Glacial Shower, a shower head that holds a block of ice and shoots out a near-freezing stream of water, is all of those things in the good way...and the bad...