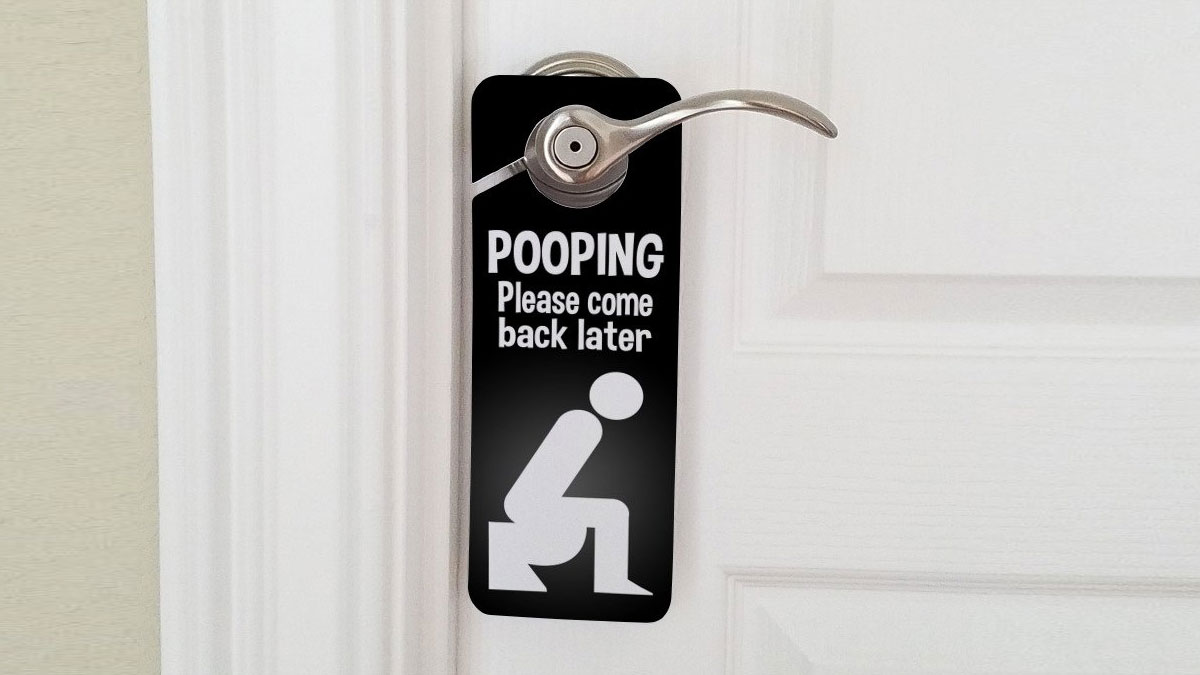 The Pooping Please Come Back Later doorknob sign is an obvious must-have choice for the bathroom door, but seller Graphics and More just made me an even bigger fan of the twist on Do Nut Disturb hangers by showing one dangling from a house's front door. Ha! Genius! I wonder if a frank communication that I'm currently taking a crap would dissuade solicitors.

I actually bought the Pooping Please Come Back Later doorknob sign for my wife because I found sometimes when I tried talking to her through the bathroom door she responded, but other times she was like, "No! I don't know! Go away!" At first I thought it was another baffling woman thing, but later realized the "No! I don't know! Go away!" times were her pooping times, and she either didn't want me to hear the sounds of this communion, or just didn't want to be disturbed during it.

Admittedly, when She-Ra: Princess of Power opened the Pooping Please Come Back Later doorknob sign at Christmas last year, she was not pleased with the gift. Maybe she didn't think it was a suitable gift for a woman. Maybe she didn't like that she just opened a Pooping Please Come Back Later door knob sign in front of both our extended families. Another baffling woman thing!

But after a few months she came around, deciding that hanging a Pooping Please Come Back Later sign on the doorknob was less awkward and disruptive to her flow (plunk?) than having me yell "Do we have any more Ranch dressing?" or "What do you think about re-watching The Big Lebowski instead of La La Land tonight?" through the door mid-poo.

"Squatting to eliminate is healthier." Golly I love the Squatty Potty's euphemistic appeal to my sense of self-preservation. Sitting on my porcelain sidekick with my feet resting on a 9" stool, torso pitched forward approximately...

On the one hand, clipping a Piqapoo self-collecting poop bag to your dog's butt exceeds injury cone and Chia Pet costume levels of shaming him. But on the other hand, you've spent the last X years following him around...

I mean, how did Vibrant figure out that swallowing a vibrating pill could create an internal laxative effect? Be honest guys. Someone swallowed one of those bullet vibrators and came in for emergency surgery and a pants...