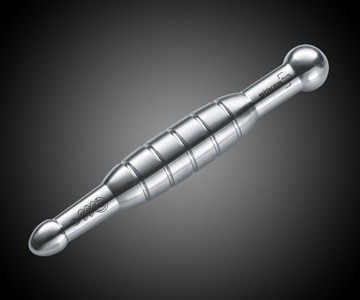 Designer Rainer Wenning calls his Waves MFS a "physio-tactical" palm stick, which might be the best bit of pretentious, made-up terminology I've ever heard. Because what "physio-tactical" basically means is that after you use the tool to beat the shit out of an attacker, you can then pop a squat on the curb and use it to soothe your hand cramp and unknot the forearm muscles that seized up in the process. The Waves MFS: from assault weapon to spa frill in 3 seconds flat.

Boker Plus makes Wenning's combination self defense-massage stick from solid titanium. Easy to hold and effective during combat, the Waves MFS also proves to be a swell acupressure instrument, particularly for application to plantar reflexology zones, trigger points, and acupuncture points. The pocket-sized stick has an overall length of 6" and weighs 5-1/2 ounces.

Uuuhhh, now where does that plastic thumb go again? Up my a...bductors? OK, I'm down, Thumb Saver trigger point massage tool. I've always had tight hips. Actually, could you go in a little? Just more towards that center...

Back Bubble Spinal Decompressor & Back Stretcher

Hey, if it stretches my spine, restores traction, and relieves my lower back pain, I don't care what kind of poon the Back Bubble makes me look like while I'm using it. Adult male in a baby carrier. Fat dude stuck in...

I like the sound of Massage Bubble Slides. But, come on, these are clearly Epcot Center Clogs. And the brown versions of the EVA foam footwear are Ballpark Peanut Sandals. And the pink ones? Lychee Slippers...

Subconscious engagement. That's the kind of interaction and benefit the CubeFit TerraMat Standing Desk Mat promises for fatigue, ache, and body strain reduction while standing at work. And I believe it. I think my wife...

How do you ruin a massage? Make me get it in various states of hanging upside down. An advanced heat and massage inversion table, Innova? Who am I, Batman?...

Who is this Norma and what does she know about air compression tech that's going to hug-massage my legs into a state of warm bliss? (Whilst simultaneously, and delightfully, making my lower half look like the proton-pack-blasted...