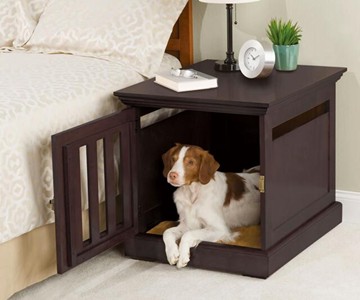 This nightstand with a built-in dog house looks swell until you see it with the dog closed inside. Then it looks like a solitary confinement chamber used for enemy spies. And even if your dog chews and pees on things in such a way that merits solitary confinement in a dark and forlorn space right next to your gigantic, cushy bed, I can't get behind the concept. I've always had a soft spot for dogs*, even the ones who are assholes. They're loyal and dopey and, unlike children, never complain about what you feed them and can be left alone in the car for long periods of time.

*Except pugs. I think I have been clear over the past couple of years that I hold pugs in very low esteem. And really, they are more rat-like vermin than dog, so technically I can still say I like all dogs and not be called a liar when I have to dropkick some tubby middle-aged lady's pug for eating the hunk of mayo-laden bacon that dropped out of my sandwich on the bench outside of Subway, and then hacking it back up on my shoe.

Ashleigh Davies designed the Doze, a combo dog bed and side table (with removable lap desk!) in response to the prompt to create "a multifunctional piece of furniture to help reduce stress for dogs with separation anxiety...

As joyful as it is to watch a dog try to get its jaws around a fully inflated soccer ball, and end up rolling and falling all over it in the process, this soccer ball made with grab tabs especially for pooch play is a...

For all their heft, hardiness, and hardware, I'm sorry to say I don't think these Industrial Container Side Tables lock. So, apologies dudes and ladies, you're still going to have to find a better place to hide your weed...

That's it, Petvation, it was one thing when the government was coming for me with their facial recognition technology, but my cat is where I draw the line! Leave Zanzibar out of this! ... Though, I mean, an automatic...

Now doesn't the Aquapaw Dog Bath Brush look like a bathtime apparatus that will make your dog...hate baths exactly as much as they did before. But at least your involvement in the process will be easier, faster, and consume...