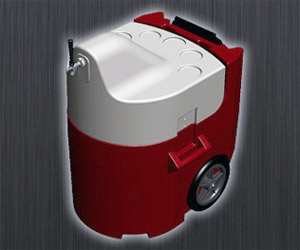 With tailgating season upon us, and cold draft beer-drinking season about to hit its, oh, maybe 1 billionth month in a row, entrepreneurial brew-lovin' buds Albert, Mark, Todd, and Ray have hit Indiegogo with the PortaKeg, a proposed alternative to makeshift monstrosities of buckets, coolers, bags of ice, bungees, 5-pound CO2 tanks, and a string of Hail Marys for enjoying icy, exquisite draft beer anywhere. Simplistically, the PortaKeg is a wheeled cooler with a built-in compartment sized to fit most any type of keg, and a hose tap system powered by a paintball gun carbon dioxide tank. It aims to provide a compact, manageable way to enjoy high (or low) quality beer on tap while rallying for a game, camping, picnicking, or party-hosting. The PortaKeg also fits comfortably behind temporary bars for catered events, and in the back of golf carts for the kinds of days on the greens that call for more than a couple of 6-packs.

The PortaKeg boys developed their idea in 2009, after spending a weekend camping with that feisty mother of invention, necessity. Enjoying the quarter keg they brought along required a dozen cumbersome accessories, from twenty yards of flexible tubing to an assortment of nuts, bolts, and screwdrivers, which made the experience as much of a hassle as an exercise in relaxation. Upon returning, they looked for a better alternative, a device that would make toting kegs more convenient during future excursions, but found only a few "portable" contraptions that weren't much less bulky than their existing cargo. And the cheapest of those rang in at $925. Once the PortaKeg concept was born, Albert, Mark, and Todd started Portabeer.com to help raise R&D and production funds.

A few sketches around a picnic table, and the able hands of mechanical engineer Ray Robbins turned PortaKeg into the living piece of lightweight plastic, 12" foam-filled all-terrain tires, and collapsible handle currently looking for funding on Indiegogo. The project runs through September 5, 2012, with a pledge level of $500 required for backers to receive their own PortaKeg. Not cheap, to be sure, but if you happen to be a diehard tailgater, outdoor partier, and draft beer fan--or can get a few friends to go in on it with you--we'd imagine it would be a pretty handy device to have during football season and summer outings.

PortaKeg measurements are 39" high (35" faucet height) x 26" wide x 32" deep. Its rough weight when filled with ice and a full keg is 205 pounds. For commercial purposes, it is also primed for corporate and school (or personal, if that's how you roll) branding, and has additional advertising space on the back for display at beer tastings or sales events.

Crushing an empty beer can on your head may be a real crowd-pleaser, but if you're unsuccessful...enjoy the memes and viral videos. And the concussion. But stomping on empty cans to crush them, now that has a much higher...