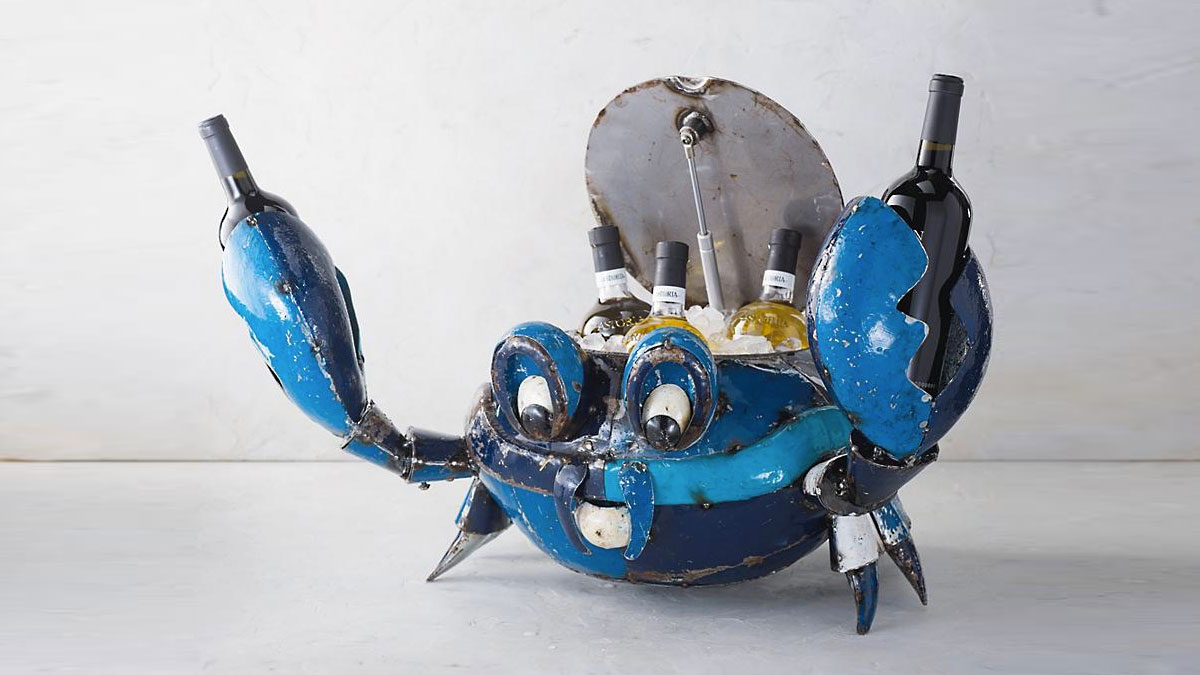 His name is Carlos, the uncelebrated blue crab cousin of the feisty red Rasta Sebastian. Having been denied Disney animated stardom, he accepted an offer from Frontgate to become a beverage tub. It's not the worst gig on earth. He gets to be outside. No one's going to eat him. He's gotta trade swimming in salt water for having ice, melting into fresh water swimming in him, but, hey. It's his duty to keep your beers and white wines and vodkas cold. He'll mind your sodies and lemonades too. Anything that isn't and doesn't contain tequila. He'll drink that. Carlos the Blue Crab loves him some tequila. 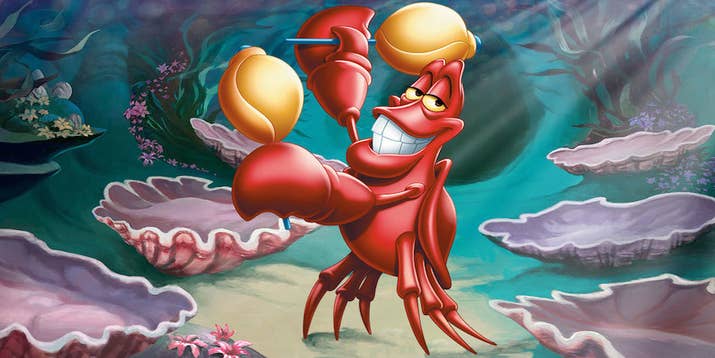 Blue Crab Beverage Tubs are upcycled from 44-gallon steel drums (so maybe they can get down in a "Kiss the Girl" jam session after all.) They are designed to weather and take on a rusty patina over time, so feel free to leave your Carlos outside even when you're not up for chilling with him.

In addition to his 9-quart ice receptacle center, Carlos has room to hold two wine bottles in his claws, and comes with a fish-shaped bottle opener around his neck.

We've had a cruel enough winter, so here's hoping for a cool, cool summer this year, starting with the best coolers to complement your camping trips, picnics, backyard BBQs, and water faring expeditions...

The Igloo Party Bar Cooler keeps the party lit up all night long courtesy of LiddUp technology. About 4 years ago, startup LiddUp sought crowdfunding for its own illuminated cooler. The campaign didn't quite hit its goal...

Better handcuff the StowCo to your wrist because this suitcase contains 120 ounces of puuure Coke. And thanks to its closed cell foam insulation, the Coke will stay as cool as you are carrying it around all nothing-to-see-here...

Blind tasting beer might be one thing, but blind picking, and then getting stuck drinking all 12 ounces of whatever can or bottle you pulled up from the icy abyss? A Coleman Cold Glow Cooler Light is a small investment...

Igloo sees Mother Earth foamin' at the mouth from all the single-use polystyrene coolers we've shoved down her throat over the years. They've created the Recool, a compostable cooler made from recycled paper pulp, as...

Boomin' Bluetooth speaker coolers are nothing new anymore, but KUBE shows they're still popular enough for designers and engineers to improve upon. KUBE's portable, wireless audio system built around a 37-quart ice chest...