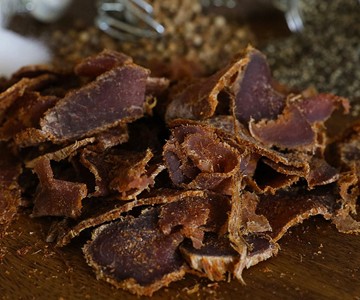 Ayoba-Yo makes Biltong. And if saying so sounds like I'm speaking in a foreign tongue, it's because I a little bit am. Both "ayoba" and "Biltong" are words more commonly heard in South Africa. The former, at least as far as I can tell means "great" or "awesome," and probably comes from Zulu street slang. And Biltong is dried, cured meat--South Africa's take on beef jerky, but with a few preparation variations.

The Biltong here comes from Virginian (by way of South Africa) company Ayoba-Yo, and they describe their dried chunks of protein as "somewhere between jerky and prosciutto." It all starts with beef--your choice of standard or grass-fed--that's been cut, marinated, and then air-dried over 14 days. Ayoba-Yo says their method and timespan produces sliced Biltong that is more tender and naturally flavorful than your typical chewy, tough, crumbly, or, as I've personally experienced, lodged-in-your-digestive-tract-for-a-week beef jerky.

Having tried some Ayoba-Yo Biltong myself, I think the comparison to prosciutto, even though prosciutto is pig, is an accurate one. Biltong has a slightly more "of the beast," sanguine flavor than jerky. Probably because it isn't packed with a bunch of added sugar (0 grams to be exact), MSG (also zero), or artificial smoke and other flavors (none and none). You can get a Regular 4-ounce or Grass Fed Beef 3-ounce package of your own in Traditional or Spicy cured.

Ayoba-Yo also sells its Biltong in Finely Grated Finely Grated packs for incorporating into recipes or sprinkling on salads, hors d'oeuvres, eggs, and hot fudge sundaes, along with bits of their Chocolate Biltong Bars.

You just never know when you're going to need a fancy French steak knife to cut a porterhouse or a ribeye on the fly. In my life, anyway, I can hardly walk down the street without neighbors and shopkeepers thrusting delectable...

Freeze-Dried Dill Pickles are poppable, crunchable, addictive, and ready to desiccate your body and burn a whole through your esophagus when you end up eating the equivalent of 4 jars of regular pickles in a single sitting...