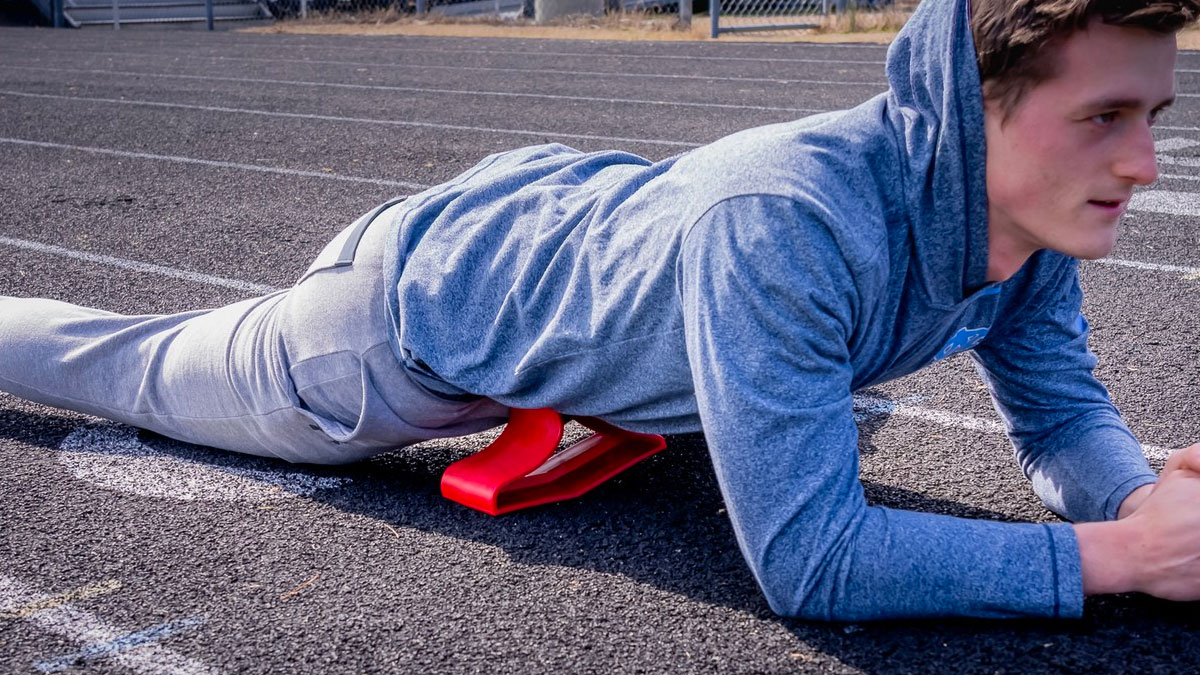 While I have not tried the Hip-Fin yet, I did, no joke, just place an order for one. Even though it's kind of expensive for a rocking hunk of plastic that looks fixin' to do mean things to me, both my wife and I are at our wits - or rather, our hip flexors end with back and knee pain.

Yes, that's right, back and knee pain. We're pretty sure it's referral pain, pain originating in one place that we're feeling in another. And since we've tried massage, foam rolling, and Thumb Savers already, but none can really get in those deep, awkward spots along the iliacus and psoas, it's Hip-Fin time.

Hip-Fin is made to lie on top of and rock gently back and forth on. Its odd design mimics the shape of an ortho physical therapist's hands as they're digging into patients' iliacus and psoas major muscles, ideally doing just as good of a job releasing them as a human would. The Hip-Fin is a highly targeted and highly specific tool - you won't be able to use it for knots in your scapula or tight quads - but if its effectiveness radiates outward from its, er, insertion point, you'll end up relieving back, hip, and lower leg pain through just two placements and some simple rocking movements.

Uuuhhh, now where does that plastic thumb go again? Up my a...bductors? OK, I'm down, Thumb Saver trigger point massage tool. I've always had tight hips. Actually, could you go in a little? Just more towards that center...

Feel the benefits...and the torture...of foam rolling from anywhere with the Rolflex Arm & Leg Massager. You can even focus the brutality on forearms and triceps, calves and inner thighs, and other arm and leg areas that...

How do you ruin a massage? Make me get it in various states of hanging upside down. An advanced heat and massage inversion table, Innova? Who am I, Batman?...

I can't tell if Hyperice's Hypervolt vibration massager is more or less the same as the TheraGun muscle massager, or a new and different type of tension-pounding jackhammer for your body...

I just ordered one of these Aculief headache and tension relief clips for myself, and while it hasn't arrived yet, I'm showing it to you now just in case you too have had a giant knot lodged under your shoulder blade...

Who is this Norma and what does she know about air compression tech that's going to hug-massage my legs into a state of warm bliss? (Whilst simultaneously, and delightfully, making my lower half look like the proton-pack-blasted...

Headache? Migraine? Just want to bury your head in the freezer or a bucket of ice? How about a striking purple hat filled with cooling, soothing, pain-easing Magic Gel instead?...

Elo + My Favorite Peelow = Me Lo...aded Up with an At-Home Hot Stone Spa Experience. Me lo...ving the feel of thermotherapy that doesn't cost $150 and hour. Me lo..athing the sound of my alarm buzzing me away from my...

I've makeshift Mysseuse-d myself on the corner of a wall or door more times than I can count. And self-massages with devices like the Shiatsu Pillow and doohickies like the Beastie Bar have become prett