GlassFloor - Sports Courts of the Future 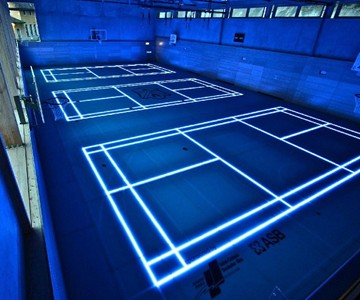 The ASB GlassFloor introduces traditional painted wood sports courts to the unlikely versatility of glass, the multi-functionality of a subsurface lighting system, and the bow-chicka-bow-bow of sexy blue LEDs. OK, maybe not so much that last one. Though I imagine if GlassFloor technology is implemented at the college level its grid of glowing courts, instantly alterable from basketball to volleyball to tennis to squash, will be repurposed during the gym's after hours to something more along those lines. Heh, heh, no pun intended.

With the press of a button, the GlassFloor system controller alters its illuminated LEDs from the layout for one sports court to that of another. For professional sports, as well as for peewee sports full of easily confused children, the elimination of lines corresponding to sports not actually underway at that time also eliminates potentially fateful distractions. More importantly, people like pretty things. That's why women's professional tennis is 1,000 times more popular than women's professional basketball. A single set of lines laid down for a single sport is more pleasing to the human eye than a pandemonium of markings intersecting and bisecting and perpendicularing all willy-nilly. Especially, ASB points out, when those single sets of lines glow. Once again: bow-chicka-bow-bow.

ASB GlassFloors employ a double beam aluminum substructure and maze of LED tubing arranged according to the lines and arcs of whichever indoor sports the purchasing facility hosts. Their custom made glass covers, treated to reduce shine and light reflection, have even more elasticity than most wooden floors, and, combined with the substructure, maintain equal deflection over their entire surface. Friction on the glass is controlled by burnt-in ceramic dots, the quantity and size of which have been adjusted to meet the friction values of traditional sports floors. Meaning that when a go-getter dives for a ball, or the tiniest of the mighty mites gets bodychecked onto his ass by the class moose, GlassFloor surfacing won't tear off multiple layers of their skin.

In the competition for Best Means of Sports Court Mapping, I think we have a winner. Kudos, GlassFloor. I'll have some waffles with that chicken dinner, please.

ZipChips help make spontaneous acts of recreation part of your EDC. Slip one of these mini flying discs in your pocket and, according to ZipChip, you'll be able to "Zip your Chip for long throws and fast paced action...

Moving liquid floor tiles spell DIY dance floor at the wedding and will make every kid want to stomp and spin and roll all over the floor in their bedroom. Get a few for your girlfriend, and the neon fluid free-flowing...

America may not be rife with hockey fanatics like our Canadian compadres, but Hat Trick BBQ still has pretty much all of English-speaking North America covered with their recycled hockey stick grilling utensil sets. Because...