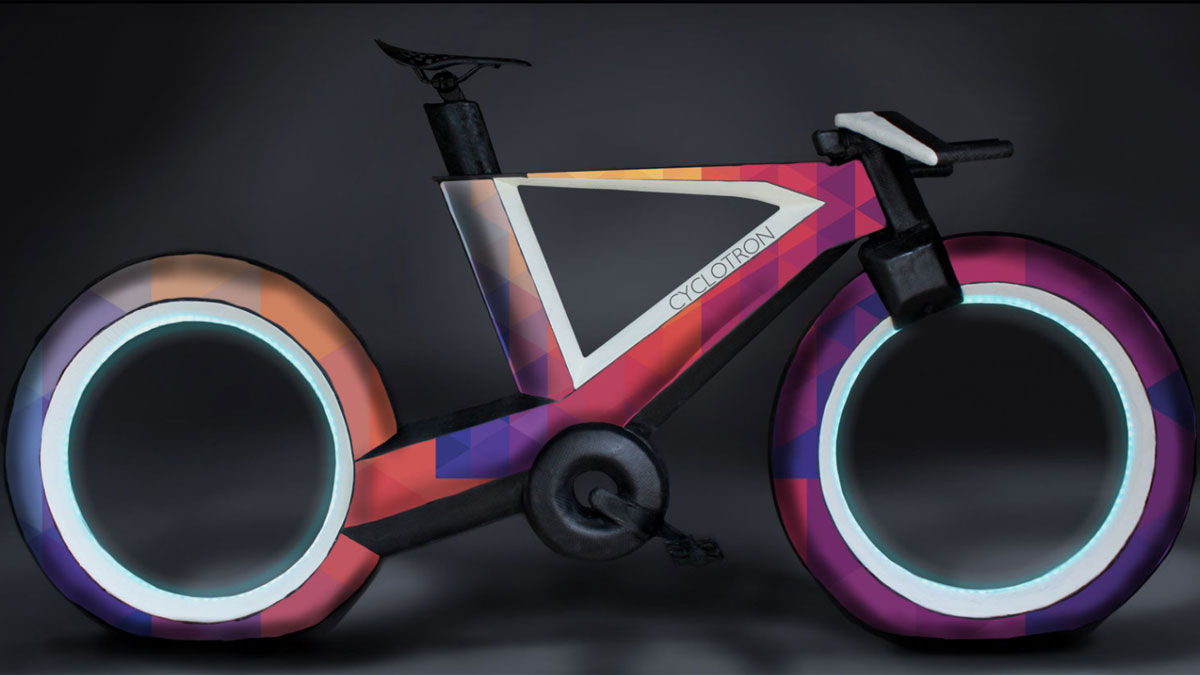 For all the Sam Flynns out there who need more exercise, you'll soon be able to trade in your electric Light Cycles for pedal-powered Cyclotrons on your joyrides and daily commutes. The self-described "Future of Cycling" is a manual bicycle fitted with hubless, spokeless wheels, and packed with a host of hi-tech functions and feats of design.

The Cyclotron's most obvious departure from traditional bicycles is its elimination of wheel hubs and spokes. The company calls the transformation an improvement because: 1) the now-hollow wheels can serve as "utility slots" for cargo storage; 2) it allows for fully integrated brakes and better aerodynamics, as well as integrated mud guards; and 3) bike tires will be airless, made of solid polymer, and last for over 6,000 miles.

The Cyclotron's internal E-Gear Box and encapsulated drive train options enhance bike operation and maneuverability by allowing shifts in less than 0.2 seconds, and up / down shifts under load while standing still. The 18-speed E-Gear Box model has a full auto-shift mode, and manual gear box models, in both 18- and 12-speed, provide optimal gear suggestions.

Integrated automatic smart lights and a self-charging Li-ion battery pack to power them TRON the Cyclotron out even more, as do the bike's 10+ built-in sensors and accompanying Cyclo App. Sensors operate on the Bluetooth Smart / LE standard and detect all relevant cycling data, which is sent to the Cyclo App in real time, plus auto saved to a Cyclo-Log for later use.

Read more (a lot more) about the Cyclotron on the bike's Kickstarter campaign page here. If you've got the cash and the want, you can also pledge for your own spokeless transporter through July 23, 2016.

Better make sure you've got both of Rinzler's identity disks before heading into battle with the wife for permission to drop $1,300 on this form-molded set of leather badassery. UD Replicas made 750 TRON full body motorcycle...