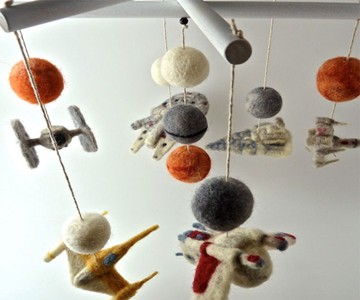 So I get that this Star Wars baby mobile is probably hand spun from fine wool and all, but is the wool shorn from golden fleeced sheep? Does the miniature Millennium Falcon also contain a miniature Han Solo and Chewie? Who are living and ready to read your children bedtime stories and protect them from the bogeyman? No, wait, I know: George Lucas himself got to assign the Star Wars baby mobile its $440 price tag.

Though in the extraordinarily expensive dangling Galatic Republic's defense, most baby mobiles experience a severely limited useful life. Maybe 8 months, or until the kid gets big enough to stand up in its crib and rip apart anything within arms reach. But the Star Wars baby mobile's capacity to charm and delight will last indefinitely, given that as soon as your kid grows out of it, you'll be relocating it to the ceiling light fixture in your own bedroom for long term enjoyment.

Andrea Burnett's kiddified ode to Star Wars takes to the yarn classic series icons, including a Naboo Starfighter, Tie Fighter, X-Wing, Millennium Falcon, Star Destroyer, Republic Attack Gunship, 8 orange and white planets, and 1 Death Star. The pictured mobile was a custom order too, so future buyers can tweak its basic framework with their own selection of Jedi, Siths, ships, and celestial formations. Burnett will include up to 6 Star Wars figures or aircraft and 9 planets.

Does your baby have a sick right hook? A certain-nose-bleed front kick? A surprise wee-to-the-kisser move? The Buff Baby Speed Bag is a crib or carrier hanging toy that will help hone their skills on something other than...

Yep. That disposition looks about right for a baby in an octopus costume. Sure, you think turning your kid into an 8-legged puffy pink pillow with 0% mobility (albeit 80% protection from bumps and falls) is precious and...

At the end of the day, you'll still be a dude pushing around a baby...or a pomeranian...in a stroller, but at least with Skoda's Man-Pram you can mow the fuck over anyone who gives you shit about it...

Either the Baby Shusher shhhhhhh-ing machine is a Nobel Prize-caliber invention, or the baby in that video learned in the womb how to be an Oscar-caliber actor. Arrrgh, that sound, that wailing. I can't think of a noise...

BUSYWOOD gives kids beds of their own and homes of their own all in one with this series of beds in modern-style house designs. And I have to admit, I'm jealous. The handmade alder wood frames are unique and standout...