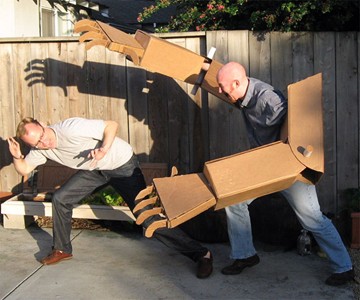 When I transform into a paper-product-based Optimus Prime, I like to take on a more active role in the process than lifting my giant cardboard robot arms out of a giant cardboard box. So thanks be to Chuck Norris that Etsy's Giant Cardboard Arm peddler, whose preassembled phantasmagorical creations struck gold a while back, now has a DIY kit for industrious boys and girls to use in constructing sets of significantly oversized shoulder spaghetti themselves.

Including all the pieces needed to craft the ultimate set of limbs and joints, the Giant Cardboard Robot Arm kit equips everyone from kids to jokesters to masters of cosplay to astound the world with a 12+-foot wingspan poised for hujungous hugs, supersized high-fives, and acts of pure terror. Builders should allow 5+ hours to assemble the pair of 5'6" arms, and acquire a large vat of glue. A 55-gallon barrel of lube may also work.

Once completed, robot arms allow for both 90-degree bending at the elbows and 360-degree rotation at the wrists. They make an excellent medium for stickers, paint, Christmas lights, and fur trimmed from the Sasquatch you took down with your portable survival rifle. In addition to each being the length of an entire person, Giant Cardboard Robot Arms measure 9" x 9" in width.

Now I don't know how many people out there who are into candles and wax melts and aromatherapy are also into robots, but if that's your demographic, my dudes and ladies, have I got a Robot Lamp Candle & Wax Melts Warmer...