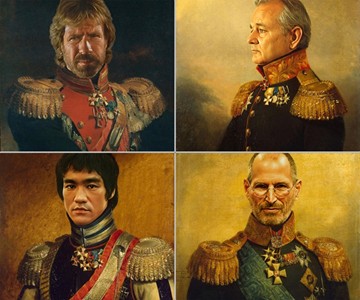 Obviously the only one of these celebrities who really sat for his French Republican Guard...or whatever...portrait in the 19th century is Chuck Norris because he's immortal and easily over 200 years old. The rest are fakes, Photoshopped--or replacefaced--in. Napoleon himself commanded the crafting of Norris' painting, though. The truth has been buried in the annals of history, but if you believe the rumors, which I do, Napoleon and Norris were a team. And the former was the mere figurehead half of it. Chuck felt bad for Nap on account of his being a midget and all--plus the little guy and his temper reminded Chuck of his childhood buddy Rumpelstiltskin--so he stayed in the shadows strategizing France's world domination and calling the shots while Napoleon enjoyed the spoils of pseudo-power and fame. Another interesting tidbit: though widely believed to have bit it due to stomach cancer, Napoleon actually died of a crushed skull one night when he and Chuck got drunk at Longwood House. Chuck made a few off-color cracks about his carnal knowledge of Josephine, and Napoleon made the mistake of trying to retaliate by head butting him in the stomach.

So anyway, the rest of these replaceface prints of celebrities posing as dapper soldiers are total fakes, but I still might buy the one of Bruce Lee because it reminds me of Asian fusion, which reminds me of this duck confit sushi roll I had one time, the name of which I can hardly even type without slobbering all over my keyboard. I could also probably win points from my mama by giving her the Hugh Jackman portrait, and points from just about any lady on the street by giving her the right epaulette and half-draped cape of F'ing Leonardo DiCaprio.

Celebrity replaceface posters print on matte white, 100% cotton rag, and have a 1" border for framing. Sizes range from Mini (8" x 9"; $24.95) to X-Large (28" x 32"; $55.95). The portraits are also available as stretched canvases, iPhone/iPod cases and skins, and--oooh--throw pillows. Now that changes everything. How distinguished my Backpack Sofa will look with General Bill Murray lounging against one arm and Colonel The Rock against the other.

If you think celebrities being soliders is pretty sweet, check out these patriots being badasses.

This Human Face Baseball Hat is ready to play ball...with anyone who thinks they can look it in the eye without shuddering. Yeeks. Every time I glance at Sabri Tunca's handmade creep fest, I have to shake it off like...

From Delightful to Disturbing: 15 Personalized Gifts

Your own face on a face mask. The option has been available, and shown a few different faces of itself, for years now - remember the creepy Realface clone? - but this one from Obscure A Tees is made in the face of Covid-19...

The most endearing part about the Kuwaete Sukkiri Tongue Exerciser marketing campaign is that it claims the silicone (and grapefruit scented!) apparatus is intended to "help improve your face line and those flabby, sagging...