The Basic Laws of Human Stupidity 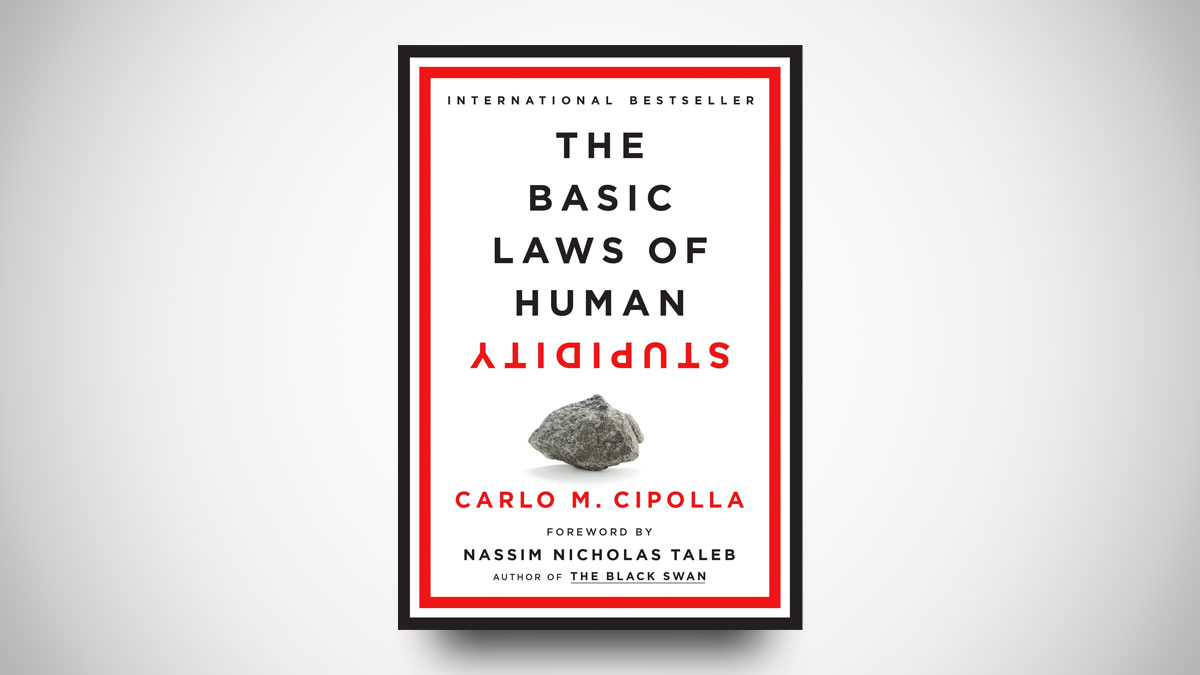 Oh, you dudes don't think Cipolla's book is a how-to? Well, here's the first line in the blurb for The Basic Laws of Human Stupidity: "An economist explains five laws that confirm our worst fears: stupid people can and do rule the world." Sure, the idea is that smart people will read his words, and learn to spot ignorance and ineptitude, thus preventing the dum-dums from rising to power. The problem?

Stupid people like other stupid people. They make sense to them. What doesn't make sense to them? The Basic Laws of Human Stupidity. And #1 in those laws, according to Cipolla, is "Everyone underestimates the number of stupid individuals among us." In other words, there's a lot of them. And they're going to keep supporting one another, lifting each other up, reproducing to keep their numbers strong. The Basic Laws of Human Stupidity is just Idiocracy translated into academic writing!

Plus, how do you know if you're stupid or not? Does simply "identifying" someone else as stupid make you smart? Or perhaps does...reading The Basic Laws of Human Stupidity, agreeing with it, and proselytizing it make you smart? I'm not sure.

Seems like a smart way to sell some books though.

It's a cat cover-up! No, not a cover-up orchestrated by cats, say, to hide all that toilet paper they just shredded as you tried to hoard it amidst the coronavirus outbreak. A cover-up in sticker form, one that pairs...

Which Cult Should I Join?

Which Cult Should I Join? Seeing as it's Sunday and all, I'm sure you've been asking yourself this question all morning. And not only does Jo Stewart have the answer in full book form, she's used the Choose-Your-Own Adventure...

Living Off the Grid

Living Off the Grid: What to Expect While Living the Life of Ultimate Freedom and Tranquility is author, speaker, and off-gridder Gary Collins' latest effort to teach others how to "unplug without sacrificing the joys...

SIND Studio has a mug - the drinking kind and the face kind - for every expression you wear and emotion you feel before and after you've had your coffee. There's a groggy Yawning Mug (before coffee). A jubilant Laughing...

The PC5 People Counting Camera: for those of us who never fare so well when we run out of fingers. Designed with a 95% recognition and tallying accuracy rate when placed outdoors in direct sunlight, and a 98% accuracy...

Why do dog owners keep dawgin' their dogs, dawg? These human face dog masks are right up there with the Werewolf Dog Muzzle on the list of pet supplies we b

What the Marie Callender's is a People Pot Pie? According to Ashley Newman, owner of Etsy shop It Came From Under My Bed, and possible evil witch from Hansel & Gretel, it is a "pie made of people." People mixed with fava...

I'd say, "Poor bastard," but dying in bed, curled up all cozy, sleeping in the fetal position, isn't the worst way to go. Though I guess they don't usually go to the trouble of drawing chalk outlines of the newly deceased...