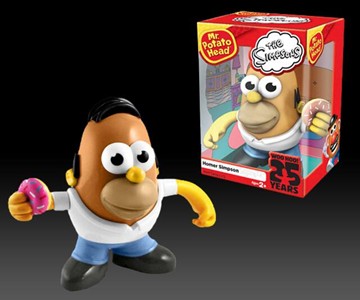 25 years of life in Springfield are honored with a potato. Plus some bulbous eyes, a scruffy muzzle, and Woo hoo! a pink-frosted donut with rainbow sprinkles. Mr. Potato Head Homer Simpson has been released as an homage to the 25th anniversary of TV's longest running animated series. Fred Flintstone raises a club to ye, Matt Groening, and even Archer in Vice form snorted a few lines of coke and banged an extra hooker in salute to this great achievement. The 1950s-era toy suitable for children ages 2 and up that emerged from it speaks for itself.

Do you know the original 1952 edition of Mr. Potato Head had a potato just for his head? The rest of his body was normal. Also, the potato head was a real potato (not included in box). Also, one of his faces looked kind of like Billy the puppet from Saw. Then, due to complaints of rotting vegetables, FDA concerns, and reports of potatoes hacking off human body parts for their collection, the all-plastic, whole-body version we know today took over in 1964.

Homer Simpson, at the behest of Herb, who felt his company needed a vehicle that would entice the "average" American, once designed a car encompassing the precise attributes he himself wanted atop 4 wheels. The result:...

What happened to poor Boba Fett? It looks like some jealous Stormtrooper whitewashed him in Photoshop. I don't know if I can condone this action figure, even if it does represent the Star Wars franchise's initial vision...

Twenty four cans of Homer's favorite pastime will have you snoring in your La-Z-Boy before midnight. These aren't just cans that say Duff Beer on them with soda inside either. They have actual alcohol in them. German...