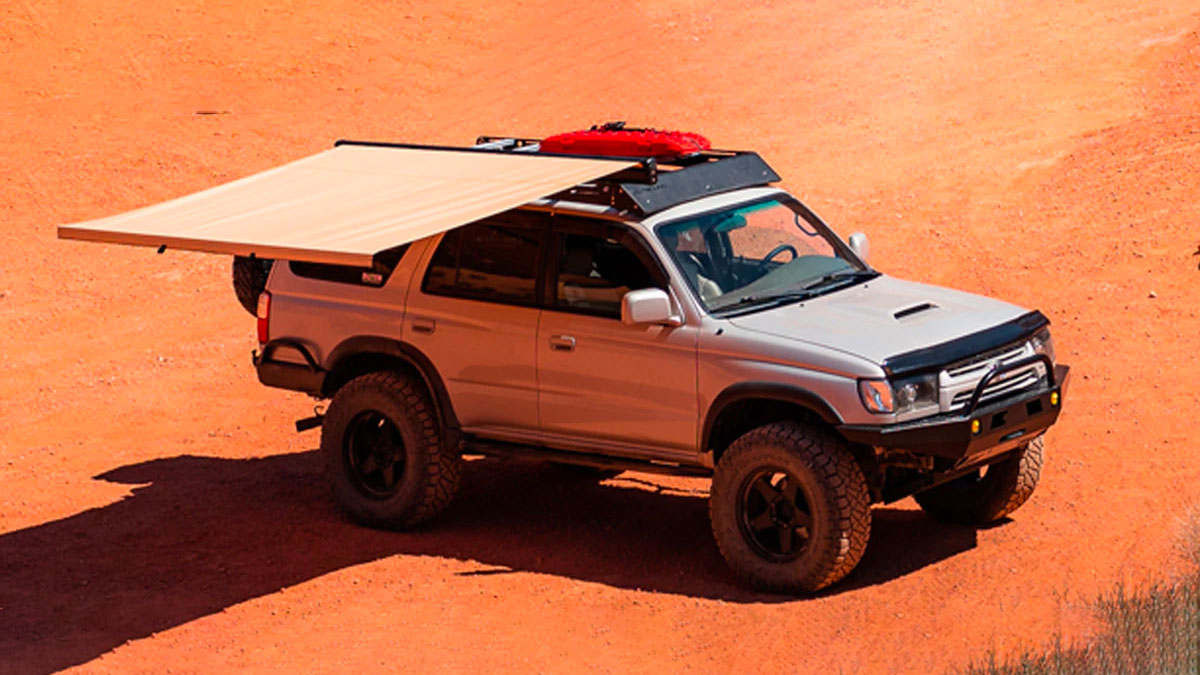 That Kammok's Crosswing car awning takes just 3 seconds to deploy isn't even its most impressive attribute I don't think. For me, it's seeing the sunshade fully extended and ready to block UV rays without a single support on any of its other 3 sides. The Crosswing just pulls out and chills there, suspended in mid-air like some kind of magic carpet waiting for Steppenwolf's chorus.

Kammok developed the Crosswing in an effort to make car awnings and canopies faster and easier to set up, thereby increasing the chances you'll use them more than once after making the purchase. The Crosswing comes in 5' and 7' widths, and affixes to a variety of roof rack systems using Talon Mounts. Once installed, the fast-deploy nature of the awning allows you to simply pull it open - at 3', 4.9', or 6.5' length increments - to create instant shade.

In addition to the near-total elimination of manual labor in awning setup, Kammok points out the Crosswing's fast-deploy nature makes it easy to use for just a few minutes, while unloading groceries, or waiting for your slow-ass friend Cornelius to to emerge from his house, or for several hours, while camping or watching your kid's baseball game.

To eliminate legs, lines, and poles, the Crosswing uses an X-frame that makes it a self-supporting structure, even when fully extended. It further contributes to the awning's setup simplicity, plus increases the possibilities for use - no poles to knock over, and no need to find a specific type of terrain, or a level surface to plant them on.

If you're interested in deploying a Crosswing car awning in 3 seconds yourself, head over to Kammok's Kickstarter campaign, and pledge for one of the canopies through June 30, 2022.

Living large in the Living Lodge. This combo outdoor shelter and camping tent from Snow Peak features a roomy open canopy for group gatherings extending from a fully enclosed sleeping space large enough for 3 to 7 people...

This belongs on The Game of Thrones or Lord of the Rings. This bed made of ash and featuring silk curtains, is part of a collection of furniture. I think this bed is probably too good for me. If I laid my dirty feet down...

I've had enough Netflix & Chill for the year, I'm ready for some Pool Time & Chill, some Sandy Beach & Chill, some Back Patio, BBQ & Chill on a Zero Gravity Lounge Chair - with shade canopy! - to take it from here...

Count the ways you can configure your Kijaro Kubie! This multi-use blanket is shaped to perform 8 unique outdoor functions. They include:...

Regress a few decades to your baby buggy days with Mollusc's Nano 2, a canopy-style tent that accordions open and closed to provide the shade and coverage, or panoramic views you seek while camping. While hanging at a...

My mama wanted me to get her a cedar pergola for her patio this Mother's Day, but holy crap! Cedar pergolas are expensive! And I'm not just talking custom built pergolas, but even pergola kits, the latter of which are...