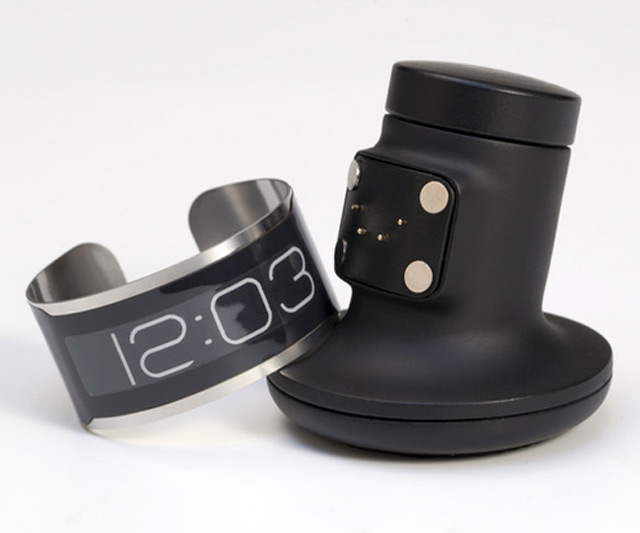 The new name in ultra-thin? It's...no, not the chick who's playing Carrie in the prequel series to Sex and the City. Hint: It's an inanimate object. It's...no, not Nicole Kidman. Mom, stop trying to guess! You're messing up my flow! It's the CST-01, a 0.8mm flexible wristwatch embedded in a single piece of stainless steel.

Weighing in at less than 5 pennies, and looking like a way cooler and infinitely more useful slap bracelet, the World's Thinnest Watch earns its name from a process of laminating an extremely low-profile E Ink display into the 0.5mm divot spanning its flexible stainless band. The CST-01 itself has no buttons or knobs; rather, time sets and adjustments--in both 12- and 24-hour formats--are done on the watch's base station.

Time keeping and output are powered by a Seiko Epson Microcontroller and Thinergy "Micro-Energy Cell", the latter of which is rechargeable up to 10,000 times over 15 years. A full re-juice, accomplished by setting the band on its base station, takes only 10 minutes, and a single charge lasts for about a month.

Pursuant to a phenomenal Kickstarter performance, the CST-01 is currently in production and creator Central Standard Timing is currently taking pre-orders from non-backers. Barely-there timepieces come in several colors/finishes. Base stations are sold separately.

June 2015 Update: Unfortunately, Central Standard Timing took 2 years to figure out making the world's thinnest watch is really hard and, ultimately, impractical. Despite raising over $1 million in their Kickstarter campaign, the company recently informed backers that with only about 50% of manufactured CST-01 watches coming back functional, they were ending all attempts at production.