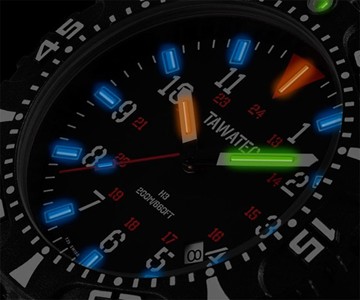 Tritium watches might be the most attainable alternative to the elusive tritium keychains we showed you last year, as well as to the even more elusive tritium girl I tried to make out of a 3D printer, a Barbie doll, and a strategically placed bra. The tactical timepiece pictured here is made by TAWATEC, and rated for use by Explosive Ordnance Disposal (EOD) divers. You know, your run-of-the-mill technician who goes on SCUBA stints to blast, neutralize, and dismantle sea mines.

Given its intended application, TAWATEC needed to create a fully-submergible, pressure-resistant watch with non-magnetic properties and unwavering time visibility. That is, wearers need to be able to see it whether they are standing in the blaring bright of day or swimming through blackness blacker than the blackest black of night. An anti-magnetic CFC case prevents interference with detonators of mines and explosives, and a 20 ATM/660 feet resistance addresses subsurface pressure and depth conditions. TAWATEC's motto, "The darker the brighter," stems from its trigalights, the watch's tritium components.

Trigalights are made of thin, luminous coatings applied to a glass surface, and then bombarded with electrons emitted by H3, or tritium gas, which cause the coatings to illuminate. Since tritium is a radioactive isotope of hydrogen*, its gradual disintegration naturally generates the electrons needed to spurn this reaction. Further, tritium's disintegration electrons have a range of only 1 to 3 mm in air (and even when exposed cannot penetrate human skin). For that reason, they faithfully and showily perform their intended function in complete containment, unable to exit the watch's sealed glass housing. The E.O. Diver watch's rainbow-hued highlights include hash marks above each number on its clock face, and along its minute, hour, and second hands.

Thumbs up too to TAWATEC's tactical decision to include a power-saving mechanism with their E.O. Diver. Pull out the watch's stem, and you'll reduce consumption by about 70%.

*This previously read "oxygen". Thanks to Dude readers...and my mama...for pointing out the error, which was likely prompted by a lack of hydrogen to my brain as I was writing this.

December 2013 Update: Amazon sold out of the original TAWATEC EO Diver watch we featured. The listing and link to Amazon below are for a similar model, but with only red and green colors on its face.