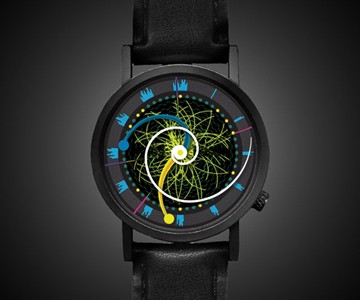 Ugh, do I have to explain what the Higgs boson is? Like, in a way that implies I understand it? Well. IMHO, it's just another tiny, tiny cog in the machine that makes the world churn, but apparently physicists have a more affable view of the Higgs boson. Especially because confirmation of its existence as another elementary particle--which was seemingly achieved just a few months ago on March 14, 2013--will spur great strides in scientific research of, uh, the land of particles. Basically, the Higgs boson's presence and use should be able to confirm or deny the validity of what particle physics has been calling the Standard Model, our current theoretical overlord of the electromagnetic, weak, and strong nuclear interactions that dictate the behaviors of subatomic particles.

If the above information is important to you, or even if it's not, you might just find this Higgs Boson watch here kinda neat in appearance with its pleasing color scheme and spiraling hands. The wrist piece's image shows what scientists believe to be evidence of the Higgs decaying into other bosons during a collision. Huh. Do all such collisions look this cool? If so, cheers to violence and death in the world of particle physics!