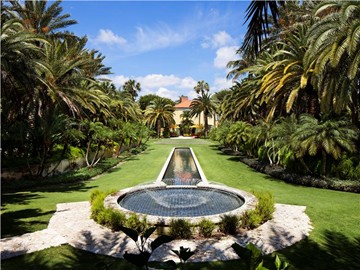 $59 million
from Christie's Real Estate »
Check It Out

Florida's Latin population tallies over 18%, and people who know stuff about populations speculate that by 2035, the state will have a Hispanic majority.

Given this data, you'd think that if the octogenarian oil baron who probably owns Palm Beach's La Casa Sin Nombre was so intent on its having some Spanish linguistic flair, he could have found a native speaker to do an accurate translation. That's not to say the property doesn't include a gallant, Mediterranean Revival-style Addison Mizner estate drawling over four acres of castle-quality grounds that shall, presumably, remain nameless. Just that a second 12,000 square-foot residence, plus three more not-so-shabby guest homes have also popped a squat on the oceanfront lot. So, to whomever coined the Casa Sin Nombre moniker, try again, mathhole, because that's five casas without names going to the first senor or senorita to produce 59 one million dollar bills.

But let's not dwell on the aura of idiocy (or that creepy, Costco-sized marble compass that looks like it's one abracadabra away from summonsing the Black Pearl) surrounding the lavish chunk of land. After all, this surprise news of quintuplets in the terrestrial oven means we can score not just one, but _five_ super sweet houses for the price of... approximately 120 super sweet houses.

The Mansion From Funny People

Maybe the most classically beautiful and inspired piece of real estate currently for sale in measurable spatial dimensions. An absolute knockout, and so innocent looking! Five shiny Sacajawea dollars say this PYT from...

Who would guess that what looks like a noninvasive skin rejuvenation clinic from the street opens into a panorama of contemporary cool with walnut floors, sultry lighting, and drop dead (literally, if you're not careful)...

Think the washer and dryer are included? This place has to be seen to be believed. Can someone who lives in LA drive by there and tell them you want to get some video for DudeIWantThat.com? Also get a video of their response...

Who's your Daddy...Warbucks? Better call him if you want the Grand Portico playmansion erected in your back yard, Suzy Q, because this definition of a spoiled child is gonna cost a whole helluva lot more than the Barbie...

Do you have $20 mil burning a hole in your shorts? It's worth less every second as we watch the financial world crumble beneath us. And you know what they say, "buy land, God ain't makin' any more of it". Well, we've...

Trophy home alert! Ah... finally, a quaint little cottage with a water view. That's all I ask for. Not much. And although moving is a hug PITA, this place seems like it might ease the blow. It might even be fun if I was...